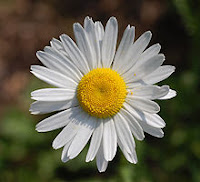 What ardent lad or lass hasn’t recited these words whilst cropping a daisy or two, consigning affairs of the heart to the flowers?

But suppose the verdict went both ways at once: “loves me and loves me not?”  Could a blossom land you in a tangle like that?  Maybe not your everyday lily.

When contradictions abound, quantum physics can sometimes show the way out – perhaps billions of ways – and Erwin Schrödinger was one of its doyens.

Implicit in Schrödinger’s math is one of quantum mechanics’ eeriest features, entanglement, or Verschränkung as he termed it. In a state of entanglement, no single element of a system, typically subatomic particles, can be fully described without considering the other elements. Yet such description or observation invariably causes the entanglement to disentangle and the original wavefunction (that described the state of entanglement) to collapse. The system stops being a superposition of states and becomes either one state or another.

You’d think that objects of quantum entanglement would have some means of  interacting or correlating with each other, and indeed they do. Yet the nature of this interaction is a mystery. Its not the result of a transmission of information, electrodynamic fields, or any known way of projecting energy between two physical systems. In other words, entangled objects don’t correlate or “communicate” by cell phone, email, or smoke signals.  However the process works, its incredibly fast – and way weird. Experiments have shown that the effects of entanglement travel at least thousands of times faster than the speed of light and over relatively large distances.

If you ask me, quantum entanglement as currently understood is practically magic, one of those mysteries that science may never unravel. For how do you explain velocity thousands of times faster than light? Is this really velocity at all or something completely outside the realm of even quantum mechanics?

Once entanglement had come to light, physicists began to wonder how it might effect larger objects like you or me or your neighbor’s cat.  To get at this question, Schrödinger came up with the following thought experiment:

A cat, along with a flask containing a poison and a radioactive source, is placed in a sealed box. If an internal Geiger counter detects radiation (i.e., the collapse of entanglement that occurs when an atom decays), the flask is shattered, releasing the poison that kills the cat.

So much for kitty? Not necessarily! A number of interpretations may apply here. One, the Copenhagen interpretation, holds that after awhile the cat is simultaneously alive and dead. Yet, when we look in the box, we see the cat either alive or dead, but not both. The act of observing the cat box, in other words, stops it being a superposition of alive and dead cat states and makes it become one or the other. (To be sure, the state of matter in most cat boxes depends mainly on how often you scoop out the poop.)

According to another interpretation, the many worlds interpretation, both alive and dead states of the cat persist after the box is opened, but are “decoherent” from each other. In other words, upon opening the box, the observer and cat split into an observer looking at a box with a dead cat, and an observer looking at a box with a live cat. The dead and alive states exist simultaneously in different domains of the universe, or perhaps parallel universes, and cannot interact with each other.

For completeness’ sake, I should mention the UPS interpretation which requires very little physics and allows for only one final state  – albeit, a state that may represent two kinds of dead (see below).

My own take on the experiment is that the cat box ought to be made of Plexiglas, not steel as prescribed by Schrödinger, so you could keep an eye on the Kitty Litter®. After all, isn’t science mostly about observation?

All of which brings me back to those dizzy daises and how quantum phenomena could effect your love life.

For starters, love does provide a quantum of solace even if such comfort isn’t easy to measure. This might be especially true, for example, if you and your partner exist in  different physical states, say, Florida and New Jersey.

For partners who are extensively entangled, a single wave function could describe their behavior – the goodbye wave, say, from the subway platform of a morning as one or the other heads crosstown on the “E” train.  Some highly entangled partners may correlate silently, each from within his own universe, although sharing an occasional phonon would seem like a better idea.

Knottiest of all may be superposition. How come, just on the verge of achieving it, your state vector collapses, especially as you grow older? (At my age, I could decay before my subatomic particles did.) Or perhaps a partner’s untimely observation collapses the wavefunction, quashing all chances of superposition. Trickier yet, unbeknownst to one partner, the other may be superpositioning in two places at once, and the cathouse isn’t Schrödinger’s.

As for “Loves me, loves me not,” just accept it. That’s simply how most partners roll, never mind quantum mechanics.  If you’re the card counting type, remember: daisies with an odd number of petals always give better results. Better still, just present your partner the flowers. It makes more sense than dismembering them and might earn you a quantum of credit.

Email ThisBlogThis!Share to TwitterShare to FacebookShare to Pinterest
Labels: Loves me, loves me not