Have you ever puzzled over the Biblical story of  Jonah, how he was swallowed by a whale, then spat out on dry land three days later? Wouldn’t it make more sense if he’d been pooped out?

Sound strange? Wait 'til you hear about kopi luwak!

Recently, a few of my family were guests for Sunday brunch at the Santa Barbara home of some friends. Having served a delicious concoction of  flour tortillas topped with huevos rancheros, our hostess Maria announced a special after-brunch treat – kopi luwak, “the most expensive coffee in the world!”

So saying she paused and relaxed in her chair, a leisurely air of intrigue and perhaps satisfaction spreading over her face.

Finishing the last few bites of rancheros, we all waited expectantly for the other shoe to drop – the explanation of just why kopi luwak costs so much.

Commodity prices always have something to do with supply and demand, but no coffee I knew of had ever remained super scarce for that long.  Had one of those American war-on-terror Reaper drones strayed off course over Yemen and blown up a plantation of ubergourmet Mocha, putting a dent in world supply? Recall that Mocha coffee is a Yemeni original. Yemen’s Sufi shrines, which date from the 15th century, are considered to be the birthplace of coffee drinking.

Or had Starbucks with its 16,600 stores finally cornered the market on some specialty grind?

And what the heck was kopi luwak, anyway?

Resuming her disquisition, Maria hauled out an issue of the National Geographic featuring an article on the Asian palm civet – the drama was building!

Coffee drinking, which has been prevalent for the last six centuries, probably began in southern Arabia (Yemen) where coffee plants were first cultivated.


Like tobacco and alcohol, the use of coffee has long been the subject of controversy. In 1600, despite appeals to ban coffee as a “Muslim drink,” Pope Clement VIII deemed it to be Christian, just as 400 years later Rabbi Igal Ben Ezra would endorse Israeli cigarettes as kosher. On the other hand, Muslims eschew alcohol (and pork), some Christians condemn coffee and alcohol (and pork), and orthodox Jews avoid anything that isn't kosher.

But let’s face it! In today’s world, religion tossed with comestibles doth not a tasty salad make. There may be good reasons for consuming some substances and avoiding others, but none of those reasons is ecclesiastical. On balance, the evidence suggests that in moderation coffee and alcohol are not harmful, indeed, somewhat beneficial, whereas no one should be using tobacco. Of course, you shouldn't be a pig about anything.


Just a few more coffee factoids. Of the two main species, Arabica (Coffea arabica) is considered better than Robusta (C. canephora), the latter being bitter and less flavorful.  Robusta, however, contains more caffeine, so its often used in commercial blends and for traditional Italian espresso to add body and a better head of foam (“la crema”).

The process of getting coffee from bush to cup is a lengthy one. After the berries are picked, the skin and pulp must be separated from the seeds (beans). One method of doing this involves bacterial fermentation that yields milder coffee but also copious volumes of foul smelling waste – not unlike an ersatz gastrointestinal tract!

Once coffee beans are liberated from the pulp, they’re usually roasted, the duration of the roast effecting flavor. Very dark Italian roast, for example, yields a thin-bodied beverage with little acidity as compared to, say, the shorter cinnamon roast.

Which brings me back to kopi luwak. “Kopi” is the Indonesian word for coffee, and “luwak,” the Sumatran name for a furry little creature related to the cat and mongoose, the Asian palm civet (also known as the toddy cat). The connection between cat and coffee is this: civets feed on coffee berries, their gastrointestinal tracks fermenting and digesting skin and pulp from the beans. The pulp provides them nutrition; they excrete the seeds or beans.

Kopi luwak, or civet coffee, is scarce, in other words, because it has to be harvested from civet poop –  the other shoe more plopped than dropped!

It seems that during the era of Cultuurstelsel (1830—1870) when the Dutch were colonizing Indonesia, they prohibited the natives from picking coffee for their own use. But the natives, recognizing that palm civets fed on coffee berries, recovered the beans from their droppings; cleaned, roasted, and ground them; and made coffee in spite of the Dutch.

Coffee, of course, wasn’t the only commodity the Dutch sought to monopolize. The list included nutmeg (the Dutch massacred 2,500 natives to secure this trade), pepper, cinnamon, jewels, and even elephants. Still, the economic woes of colonialism pale in comparison to the geopolitical consequences, many of which persist in infamy to this day.

I believe the little palm civet, now being exploited nearly to extinction by Indonesian coffee producers, deserves to be regarded as a belated victim of all this as well as an endangered species. Kopi luwak has become such a fade that wild civets are being captured and force fed coffee berries in order to meet (and no doubt expand) demand – and its threatening the civets’ survival.

What’s more, kopi luwak turns out to be mainly a commercial gimmick, not even a delicacy. According to the Specialty Coffee Association of America, “it… just tastes bad.” Some coffee experts (“cuppers”),  though, would say that it doesn’t necessarily taste bad, but is less acidic, has less body, and tastes "thin” compared to other coffees. In others words, it might be more or less comparable to a standard Italian roast.

Opined Massimo Marcone, who’s done extensive chemical testing on civet-derived beans, "It's not that people are after that distinct flavor. They are after the rarity of the coffee." So its hardly surprising that nearly all kopi luwak is counterfeit – fifty times more being sold than produced.

Black Ivory is a novelty brand produced by some twenty rescue elephants at northern Thailand’s Golden Triangle Asian Elephant refuge. The elephants are fed Arabica berries (it does them no harm), and the beans are recovered from their poop. The resulting beverage is said to be "very smooth without the bitterness of regular coffee.” Given the pachyderm processing, no doubt its also big-bodied. Costing upwards of $1,100 per kilogram, its certainly big-priced.  A few luxury hotels offer Black Ivory for $50 a cup.

Perhaps you could enjoy a cup or two of this elephant joe whilst smoking Krong Thip Thai tobacco rolled up in hundred dollar bills. Better yet, quite smoking and donate the money to the elephants – they’re endangered, too. Proceeds from Black Ivory, by the way, do support the Golden Triangle refuge.

Maria’s husband, Frank, who brewed our kopi luwak turned out to be a coffee magician, someone who might well make an excellent Cappuccino from no more than a spoonful of Postum. He’s also an accomplished latte artist. So the kopi luwak he served us had both great presentation and fine taste without even a hint of E. coli.

For my part, I’m considering a Red Rhino Blend®, Robusta Enterica, that I’d market through, say, EarthPals, Inc. of Nepal. There’re still plenty of Indian rhinoceroses in the Chitwan National Park and other nature preserves. They’re trencherman eaters, make lots of poop, and would probably revel in a pipeline of free coffee fruits. 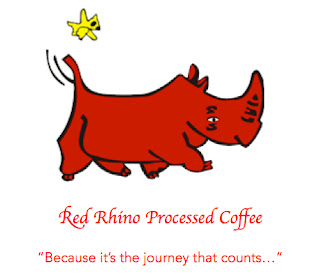 Email ThisBlogThis!Share to TwitterShare to FacebookShare to Pinterest
Labels: Pass the cream and Splenda