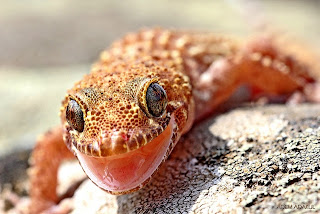 As I was walking down my west Texas front hall the other night, which is empty now that we’ve moved out, I noticed a minuscule form on the wall. It looked slender yet angular,  the way sculptor Alberto Giacometti might have imagined a cockroach. So at first glance I mistook it for some sort of matchstick insect.  On closer inspection, though, it proved to be a juvenile house gecko about an inch long.  He was poised motionless, resembling a small jewel or a dangle for a charm bracelet rendered in cloisonné – for eyes, two miniature black beads of sevruga caviar.

How do such tiny creatures survive? What kind of world do they inhabit? As it was, this little lizard would soon take refuge in a narrow cleft beneath my right shoe! You have to be careful where you tread.

My first thought was to relocate the little guy outside where I imagined he might fare better than in a house emptied of nearly everything except him and me. But how to move him? He seemed so small and fragile that an attempt to pick him up might have crushed him. So instead I conjured the idea of using the flap of a standard business envelope to scoop him up.

It seemed to work and into the envelope he dropped. But in an flash he’d pronked straight up and out like a springbok, falling miles and miles to the floor below unharmed. I tried to scoop him again, but he sprinted off at startling speed – about eighteen inches per second, I reckoned – which in proportion to body length would be like a six-foot man running nearly 75 miles per hour.

And with that he seemed to have vanished. Suspecting he might be too close for comfort, I stood stock still, then carefully lifted my right foot. Yup, he’d taken shelter under my shoe.

“Keep your friends close and your enemies even closer,” advises Marlin Brando in The Godfather – though I doubt the lizard had this in mind when he slithered under my foot. How often do we seek refuge or pleasure in the very places that could sink us?

Hideout exposed, the little gecko zipped off to a new crevice beneath a nearby cardboard packing box. I decided to leave him to fate trammeled no further by me.

Still, on account of his vast tininess – and despite the prospect that we’d likely never meet again – I decided to name him Minikin Gecko, or Mike for short. For now that we were acquainted, Mike surly deserved proper salutation -- the same as you'd accord any self-respecting Mediterranean house gecko.

The "med gecko," or Mediterranean house gecko, is one of the most successful of its kind. Herpetologists have come to believe these creatures fare best around human habitation since they’re found most commonly in urban areas. Nocturnal foragers, they can often be seen praying on insects near porch lights or other forms of  outdoor lighting on warm nights. Several species take up residence indoors where they’re usually welcomed by the human occupants as predators of insects, including mosquitoes and small cockroaches. 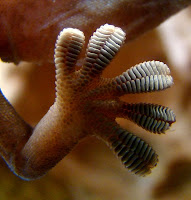 But what’s unique about geckos are the specialized toe pads that enable them to climb smooth and vertical surfaces and even cross indoor ceilings. The most popular explanation for this, without going into anatomic detail, is an intermolecular attraction known as van der Waals forces, between elements of the toe pad and the underlying surface.

Van der Waals interaction is expressed by the formula:

where U, z, R, and A are letters of the alphabet and the rest, numbers, leading you to wonder whether the gecko that lands in your soup might simply be bad at math, or worse, a bad speller. Yet geckos are said to be able to hang from a glass surface using only one toe, so maybe it all adds up.

As it turned out, Mike and I were to meet up again only a few days later. And, my, how he’d grown – by at least half an inch! I found him in the kitchen sink, apparently marooned on the porcelain yet having avoided the drain. Why van der Waals forces hadn't helped him escape, I have no idea. The sink is old but surly not in isotopic decay, and it was also completely dry.

Or maybe Mike hadn't actually wished to escape. Maybe he relished the pale, starkly surreal expanse of white porcelain punctuated by the dark abyss of the drain. Perhaps things look to a gecko the way they once did to, say, Salvador Dalí, the sticking power of whose work as an artist may likewise be due to some unseen molecular force. 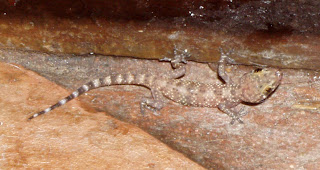 In any case, I again scooped Mike up with the envelope. But he pronked to the floor just as before and scurried under the wooden overhang of the kitchen island. Against the Saltillo tile, he was almost perfectly camouflaged and perhaps not by accident – some geckos can change complexion like a chameleon.

Of a sudden, it occurred to me that Mike and I are pretty much alike. More often than not, we're stuck to the ceiling, climbing the walls, or otherwise just trying to make a living. And sometimes we find ourselves circling the drain.

I’m going to advise the house’s new owner that geckos are fine little lodgers, to mind where he steps, and to leave the light on for Mike.

Email ThisBlogThis!Share to TwitterShare to FacebookShare to Pinterest
Labels: Climbing the walls in west Texas