Shit don't come with trophies, ain't no envelopes to open
I just do it cause I'm 'sposed to, nigga


Bookends are often symmetrical, mirror images of each other. But there can be bookends for things besides books – your career, for instance, or even your life – and these may not be symmetrical at all.


Consider the bookends to my career, Manneken Pis and Professor Owl.

Everyone knows Manneken Pis. He’s a small bronze sculpture of a naked boy peeing into a fountain, a famous icon of Brussels, Belgium. Designed by Hiëronymus Duquesnoy the Elder, he’s been situated at the junction of Rue de l'Étuve/Stoofstraat and Rue du Chêne/Eikstraat since about 1618.

Brussels offers a plethora of bronze-toned, scaled-down replicas of Manneken as souvenirs, and after a series of lectures I gave in Belgium circa 1986, I was made a present of one by my host Dietger and his wife Anaïs. Dietger handed me the trophy as I sat in the back seat of their car, just like that, a sort of Oscar for my performances, I suppose, or at least a memento of my visit. For me it was one of those “Thanks, I think” moments. Yet I was soon to discover even greater reason for gratitude.

Following the simple presentation, the three of us stopped at a Brussels winebar, Les Caves du Sablon, for some libations and convivial conversation. Glasses were hoisted and refilled. After an hour or so we left.

Now, at this point I had only the merest velleity of taking a pee. Since we weren’t far from my hotel – and I assumed my hosts would want to get home – I figured I could hold it.

Once in the car, however, everything changed. Dietger quite unexpectedly – a surprise even for Anaïs, it seemed – announced an impromptu "son et lumière" tour of Brussels after dark as the evening's finale.

I was beginning to feel a little less sanguine about my bladder capacity, but what could I say? Hadn’t I’d just been awarded the Manneken Pis? In retrospect, I should probably have claimed inspiration on that very account and requested a pit stop, but we’d already departed the winebar and by now it was getting late.

I won’t attempt to detail the sites we saw. I didn’t even remember at the time. For by then, you see, I had to pee so bad I was seeing double, responding to the jolly docents’ monologue coming from the driver’s seat with little more than muffled grunts. Dietger and Anaïs, for their part, seem to be enjoying themselves immensely. If they’d noticed my predicament, maybe that was part of the fun!

However, I do (vividly) recall the tour’s final attraction: the Manneken Pis. The little imp stood there grinning fiendishly at me through the back window of the car, blithely going on with his eternal tinkle, well aware of my wretched predicament and probably in league with my hosts.

If you’re in obligatory urinary retention, there’s no torture quite like the sound of running water.

Nevertheless, I made it back to my hotel continentiam intactum. Tottering over a commode that through my stupor bore an eerie semblance to the handiwork of Marcel Duchamp (this is Belgium), I  began to regain some presence of mind and hope that Manneken would someday get prostatism.

Yet Manneken has not only endured, he’s given rise to a whole genre of Belgian excretory sculpture, including Jeanneke Pis, Zennike Pis, and even a couple of leaky goats.

Which is more than can be said for some other Belgian landmarks I visited. In Liège, for example, l'Hôpital de Bavière, a grand old institution dating from the 17th century and one of the stops on my speaking tour, was subsequently abandoned to dereliction, replaced by more modern facilities (complete with trompe l`oeil toilets, I bet).

Fast forward some thirty years to my recent retirement from academics.

On my way out of office, a small assemblage of colleagues – this time it was a déjà vu moment – presented me with another bronze-toned idol, Professor Owl, who quite unlike Manneken Pis is solemnly clad in academic regalia dating from the Middle Ages and the great horned owls of Oxford and Cambridge. Under his robes, Professor Owl wears lots of feathers, whilst under the feathers there’s surprisingly little of him at all, perhaps making him the quintessential academician.

Yet it struck me that if Manneken and Owl outline my progress from lecturer agonistes to absent-minded professor, they also raise some questions.

Why in the world do folks need passels of trophies, medals, plaques, and awards to celebrate their professional careers? Shouldn’t achievements of any significance be rewards unto themselves?

I certainly don’t object to giving kids tokens of recognition, such as  merit badges or sports letters, that acknowledge their effort and participation. But I do object to today’s plague of lame trophies: cheap junk that perverts the significance of achievement and sends a false message about excellence.

Unless, of course, a trophy's sketchy composition turns out to be quite apposite! The Academy Award Oscars, for example, are ninety-two percent tin.  Maybe we don't need the the Razzies after all.

At the other end of the spectrum are legendary trophies of such renown that merely getting your hands on one would be an achievement. There’s the Arthurian Holy Grail, for example, iconic unto itself. And before that, the Israelites’ Golden Calf Idolatry Prize (which may still be around).

The Woodlawn Vase, awarded to winners of the Preakness Stakes, is valued at $4,000,000, though you don’t get to keep it.  Same for the four-pound, solid gold Jules Rimet soccer trophy before it disappeared in Brazil.

Because achievements that earn you, say, a Congressional Medal of Honor, Nobel prize, or Olympic gold medal seem indisputably exceptional and beyond reproach, there's usually wide consensus as to  legitimacy of these awards.

But for the rest, especially in academics and the professions, the bestowal of awards too often resembles a groupie back-scratching fest – “Award me this year and I’ll award you next” – amidst no special achievement at all. When one of my sons graduated from medical school, all too much of the ceremony was taken up with a succession of dubious faculty awards, one after another, calling to mind a bunch of trophy-drunk Millennials playing "my turn" musical chairs.

If you’re a professional, why should you be rewarded for simply doing your job, even if you do it exceptionally well? Isn’t that what it means to be professional? To be self-motivated, your own harshest critic? Wouldn't a professional worth his or her salt feel patronized rather than honored by a succession of silly awards?

Forget the trophies and trapping. Encourage confidence and self-respect. Express admiration where its merited. Praise your kids or students for good grades in school or winning the regional championship – and especially for making the effort. Reward an outstanding worker with a bonus or pay raise, not some ten-dollar fake mahogany plaque.

For an old academic like me heading into retirement, though, Professor Owl represents an apt bestowal, almost like having my statue carved. Yet I simply can’t bring myself to venerate the old bird or that rascal Manneken Pis as the totems of excellence they fancy themselves. For one thing, I’m as different from them – I have more brass – as they are from each other. For another, they’re too self-important – one thinks he’s Pisistratus, the other, Socrates. Still, they stand up stalwartly to my books and wink whenever I pass by. I nod back cordially – and believe that’s enough.

Its the thought that counts, after all, as they’re there to remind me. 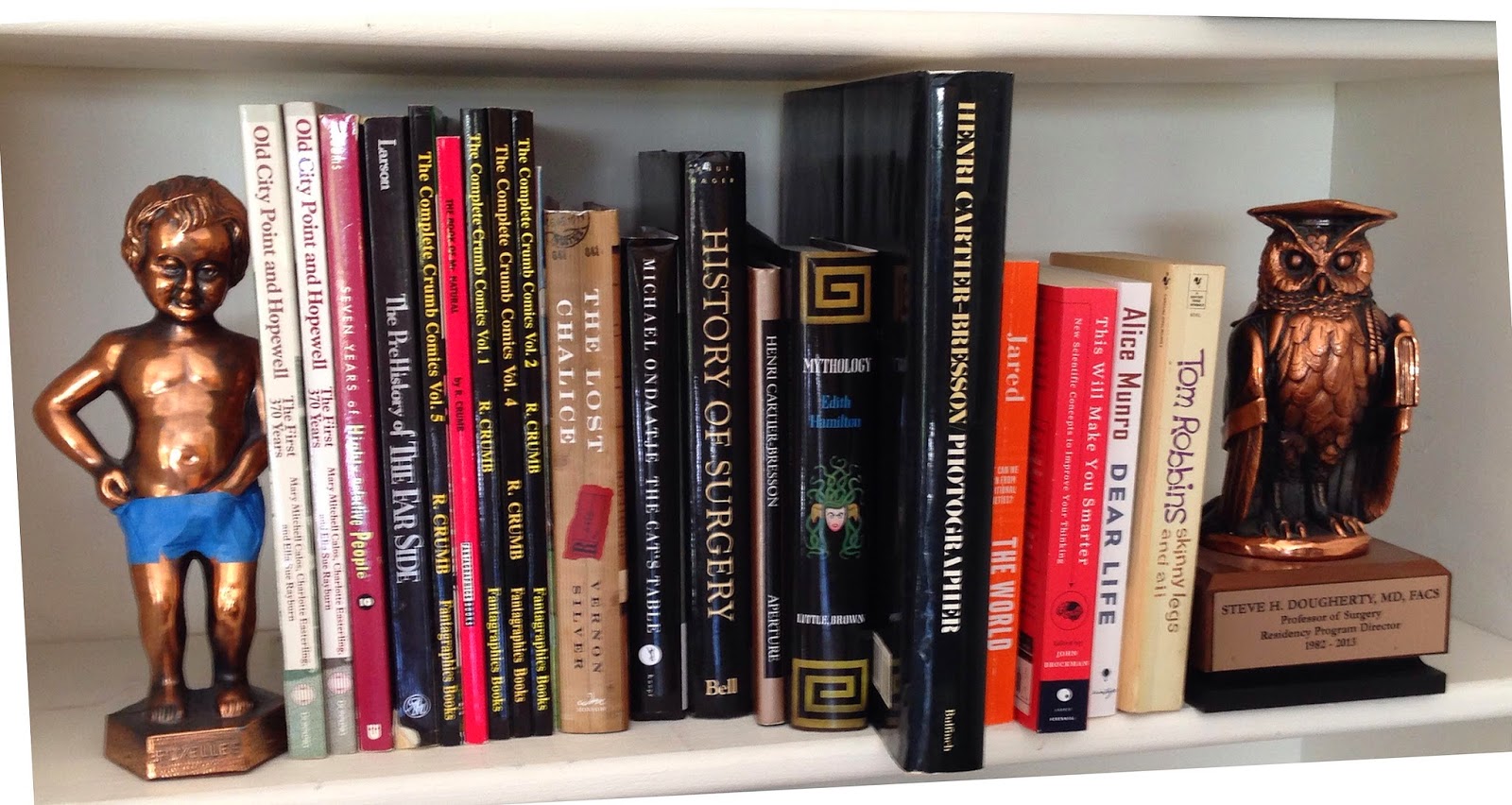 Email ThisBlogThis!Share to TwitterShare to FacebookShare to Pinterest
Labels: ‘cause you’re ‘sposed to