Trufflems? Pseudo-amnesia? It sounds technical, but it really isn’t. By pseudo-amnesia I don’t mean feigned memory loss. I mean a kind of false memory evoked by objective evidence of a prior real one now completely forgotten – a memory of a memory, so to speak, a true-false memory. What I’ll refer to as a trufflem.

But let me explain.

During the summer of 1967, I and two college buddies, Mike and Ken, teamed up for a European road trip. Meeting in London’s Trafalgar Square, we set out by train and ferry for Wolfsburg, Germany, where the following day we took factory delivery of a brand new, bright red, Volkswagen beetle. Promptly dubbing the car the “Red Flash,” we hit the road for Copenhagen, Denmark and points beyond*.  Later, we would remember the trip as the Red Flash tour.

It was an interesting moment in history. Hardly two decades had passed since World War II, and the conflict still reverberated. Here and there, relics of the fighting – Vienna’s massive concrete flaktürmes (flak towers), Bordeaux’s colossal submarine pens, artillery bunkers dug in on Normandy beaches – persisted as ugly reminders. Many Europeans remembered the war firsthand. Perhaps still wary of rampant inflation, they preferred greenbacks to their own currencies – the Marshall Plan having made America the guarantor of political and economic stability.

The Berlin wall had gone up just six years before, and the Cold War was at its height. So was the war in Viet Nam.

Thus, the reception we got was a mixed one. Good because America had defeated Nazi Germany and now stood between Europe and the Communist USSR. Bad because the US was seen as warring on Viet Nam for no reason. Moreover, as we learned all to quickly, driving a German-made car in once Nazi-occupied territory could occasion dirty looks and rude treatment in traffic.

Six weeks went by in, well, a flash. We were men on a mission, absorbing the sights in double time, sampling the ambience more like ozone detectors than esthetes, recording images indelibly in our heads. Or so we thought. Neither Mike nor I had brought along a camera, assuming our steel trap minds would retain every detail. Besides, we didn’t wish to be taken for tourists. In the event, of course, we were taken for tourists just the same.

For his part, Ken showed better sense. He’d brought a state of the art Minox III-S subminiature film camera – the kind you saw in spy movies – about the size of a pack of Doublemint gum. You could conceal the thing in your hand. Ken was taken for a tourist, too, but certainly not because of his camera.

All told, Ken made some one hundred sixteen photographs of trip.

Yet as we embarked the ferry from Dover to Oostende I began to wonder how Ken would remember his pictures once he got home. He was not taking notes, and it seemed to me that left unidentified, the photos could end up of no value.

Then I noticed him lining up the Belgian flag in a shot over the ferry’s stern. “Good idea,” I thought, “that flag might identify the photo all by itself.”  Forty years later the flag did exactly that, distinguishing the Oostende ferry from photos of two others.

But what about the rest of Ken’s pictures?

After the trip, we each went our separate ways. Over the years, we’d exchange postcards from trips of our own, sometimes to Red Flash destinations that invited a more leisurely encounter. But the Red Flash tour faded from memory.

In 2007, on the 40th anniversary of the tour, I dug out an old AAA tourist map of Europe I’d marked up with the Red Flash destinations and scanned it in order to share it with Mike and Ken. I sent it on DVDs along with some reminiscences. Ken promptly replied with high-grade Xerox copies of his Minox photos – plus apologies for not knowing what a lot of them showed!

Some, like the ones of the Eiffel tower or Copenhagen’s little mermaid, were no-brainers. I recognized the Oostende ferry from the flag on the stern. But after so many years, most of the pictures were simply a mystery.

How to put names to them?

Since my AAA map catalogued our destinations, I began to wonder if a Google image search might turn up identifying comparators from other folks’ trips. By 2005 Google had indexed over a billion images, so it seemed worth a try. And indeed, except for a few cryptic shots from the countryside it worked surprisingly well.  Moreover, identifying a photo this way would usually jog it back into memory, and with that I could flesh out the backstory from, say, Wikipedia. 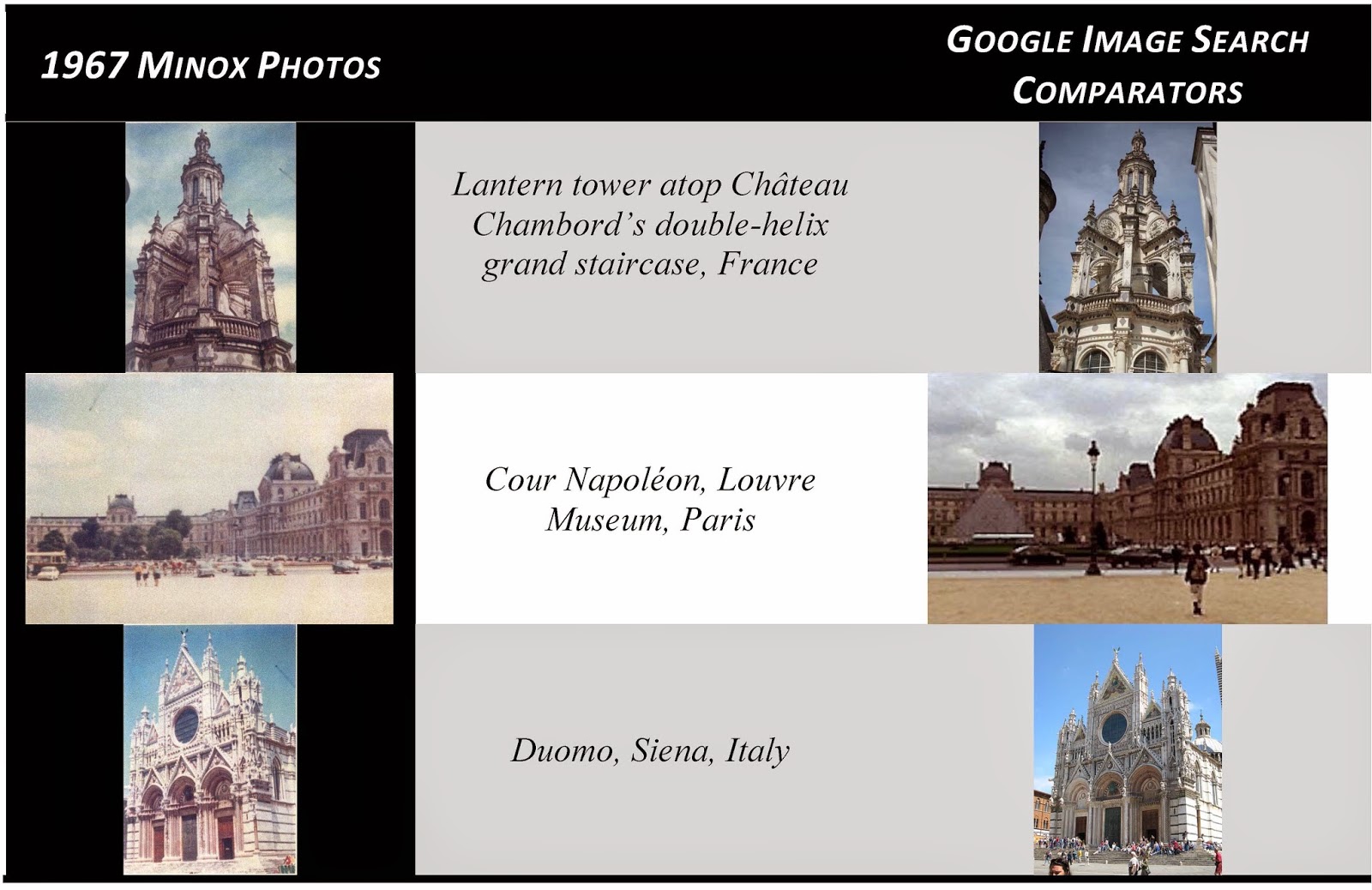 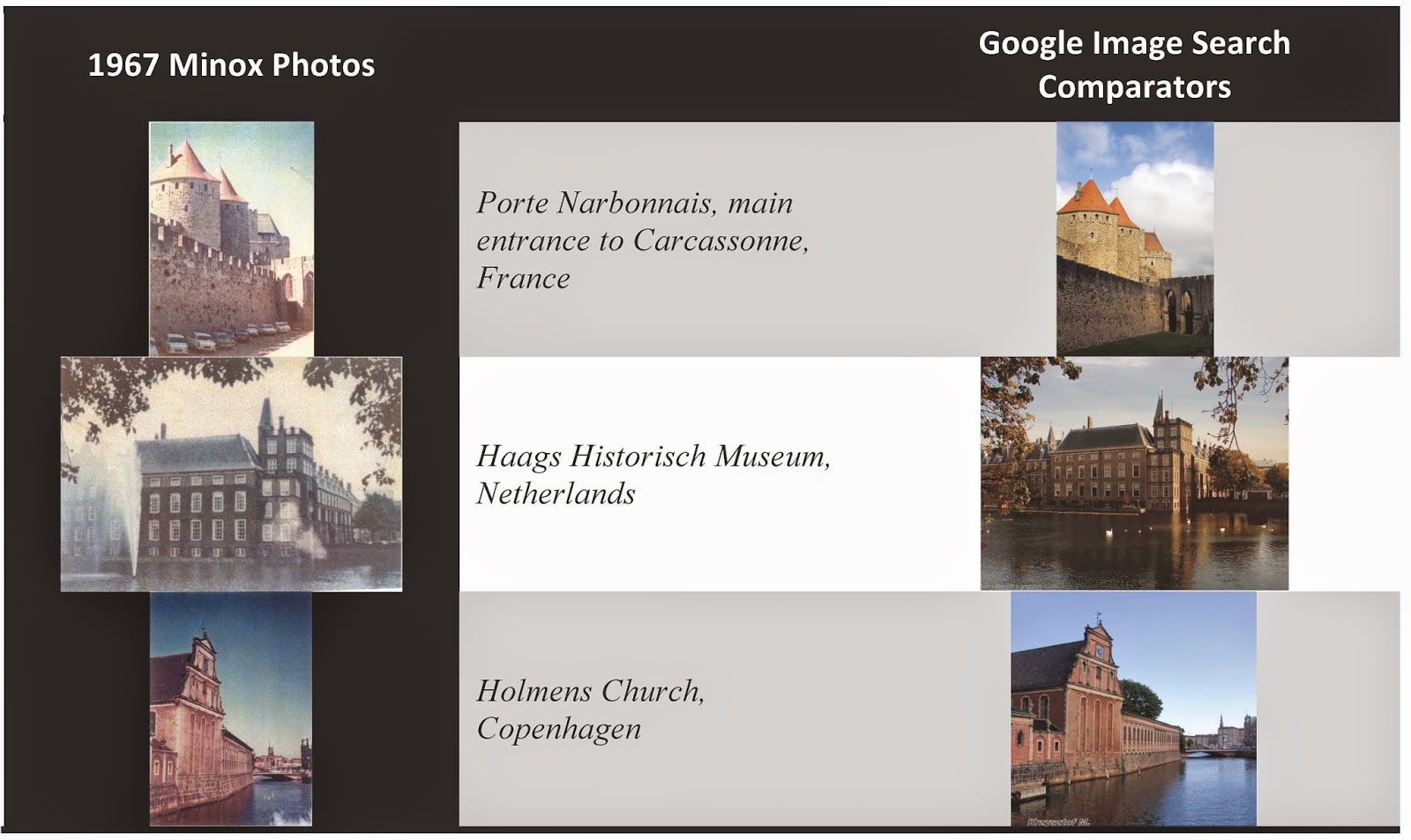 Yet for some of Ken’s pictures I still drew a blank – as though I’d been zapped with a neuralyzer, that memory eraser thingy from Men in Black (Columbia Pictures, 1997) – even after I’d found out what they were. His images of Chateau d’Amboise** are perhaps the best example. Despite all the reminders, I simply couldn’t recall the place or ever having been there. 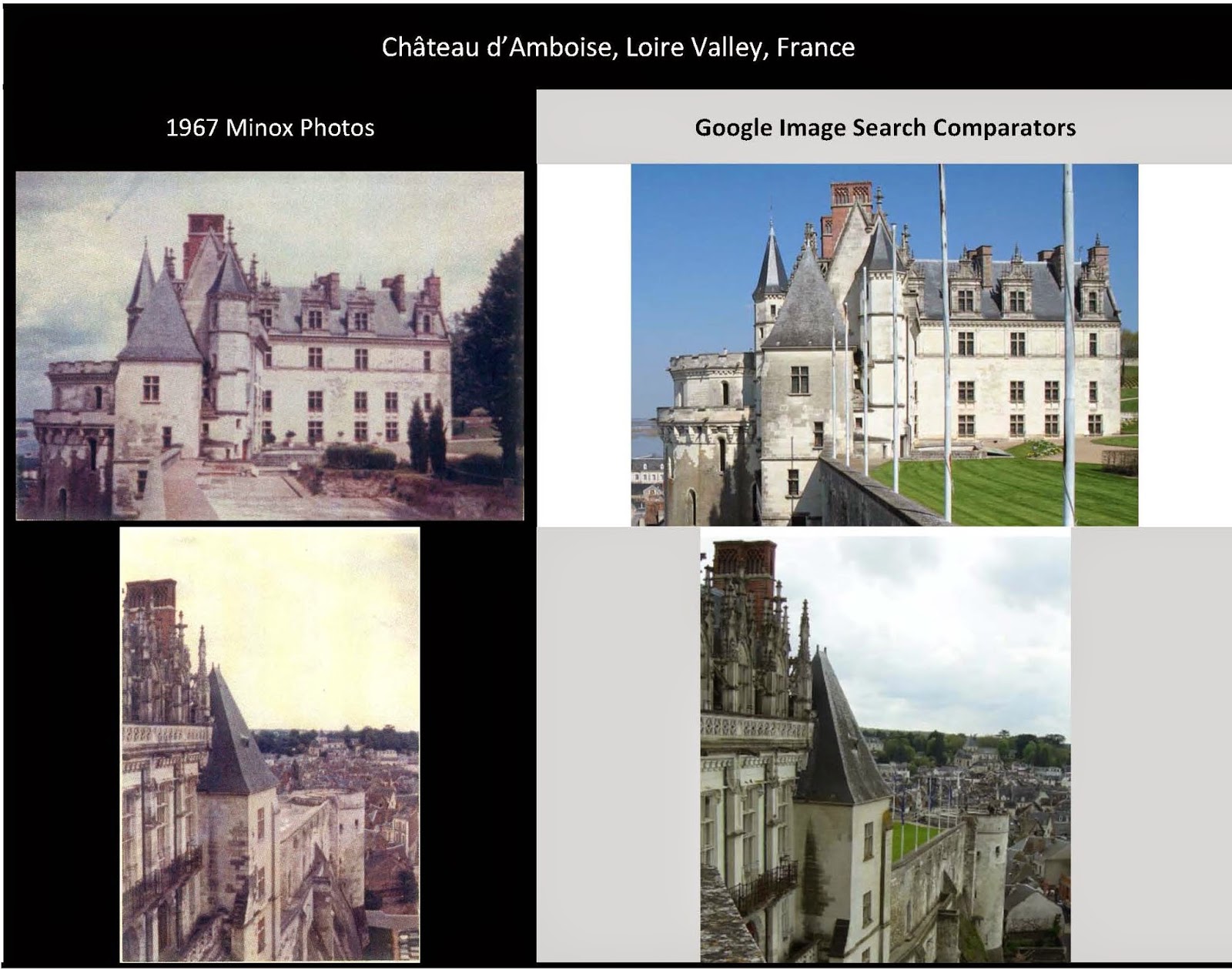 What I ended up remembering about these “neuralyzed” (though comparator-identified) photos came mostly from the internet. Any faint recollections called up by the images quickly melded with internet narratives ‘til what emerged was a fusion of the two, trufflems or true-false memories: true because they pertained to my real past experiences; false because their content was drawn (almost) entirely from the internet, not from my head.

Interestingly, once a trufflem takes hold it begins to feel like the real McCoy, not a plug for a hole in your recall. Its as though you’d remembered everything right from the get-go after all! So in a sense, trufflems are like memories of memories or perhaps a kind of pseudo-amnesia.

Psychologists have a theory for my kind of forgetting – output interference. Supposedly, it happens when “the initial act of recalling specific information interferes with the retrieval of the original information [my italics].” Intelligent individuals, it seems, forget more hastily than duller ones, yet still manage to store up more memories that can cause interference – impair recall for specific material. What the theory says, in other words, is “I’m so damned smart I forgot!”

Seems like cold comfort, but it works for me!

As it turned out, Mike, Ken, and I got back quite a lot of the Red Flash tour. Nowadays, when cocktail conversation turns to travel, I shamelessly claim bragging rights to every detail of the trip. Its especially gratifying for anything on my list of trufflems – practically like reading about a place in a book and then declaring you’ve been there. Except, well, you have!

**Aerial view of Chateau d’Amboise showing the vantage points, at opposite ends of the castle, for each of Ken’s two Minox photos. Can you find them?