“And the flesh was made word, and the word, exalted. And they beheld in it the spirit of grace and truth.”
Swami Deepsheesh Rajathustra 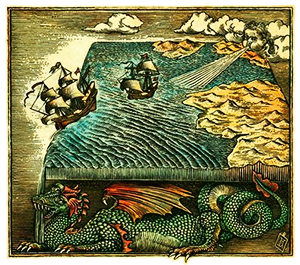 In literature as in life, characters come and go. Thus did LilthyEtta Saqueth Klatchbustle drop off the map, vanish like the ancient mariner who, bereft of compass and sextant, sails into the watery abyss beyond the edge of the world.

To many, LilthyEtta’s disappearance might have seemed illusory – a mere misapprehension, some aberration of the senses. For her presence or absence in the moment appeared as much akin to the quantum flux as the occasion ex nihilo of primary particles. You saw her and then you didn’t. Or perhaps you did. Perhaps you saw someone else altogether.

Not, however, to Giansanto Baptiste Neuvofresneli, like LilthyEtta, a denizen of Port City. He and he alone (more or less) had been privy to her departure and all its curious particulars – her vanishment, as he put it, for her exodus had been quite like no other.  Giansanto for one was quite certain LilthyEtta had gone.

Gian, or John, as confederates knew him, though given to the odd peregrination (mostly around libraries), incautious in the maintenance of cutis, sartorially negligent, spiritually disheveled, and for the most part intellectually superfluous, was nonetheless a glassmith of uncommon ability.

Indentured at an early age to Francisco de Vetro, doyen of Italian glass blowers, he had learnt the fundamentals of that trade on the Venetian island of Murano during  ten years’ apprenticeship. Later, through some perversion of academic admittance (some said a burlesque of St. John the Baptist; others, computer hacking), he fetched up at MIT.

There John made a study of light refringence (because he thought it so beautiful) in the so-called Prince Rupert’s drop, a molten tear of glass quenched in water to a hardness more durable than steel save for the vulnerability of its flagellum-like stem.

The latter weakness, through clever assessment, he managed to surmount. Instead of allowing the liquescent glass to drip slowing into water creating the stem, he guillotined it free with diamond glass shears whilst spinning it like a top.

Because this creation of his, unique among the glasses, needed working at some 3000° F, John christened it vitrum pyrex, or more whimsically, fever glass.

Yet what to do with this fever glass? Its one thing to invent something completely off kilter like silly putty, quite another to turn it to use.

Inspiration arrived in the form of a sculpture, “Hammer and Nail” (a glass hammer about to whack a glass nail) by lampwork artist Hans Godo Frabel, late of Jenaer Glaswerk Schott, Mainz. John happened to see the piece, part of the Hechinger Collection, in an exhibition at the Katonah Museum, New York.

There the Frabel wrought an epiphany.

“Of course!” he thought. “Why not cold forge the vitrum? Perhaps I could hammer Rupert drops into concave lenses that would be practically indestructible!”

How John contrived to do this remains known only to him, but do it he did. And the pince-nez readers he made (the ones that hadn’t burst during forging) proved as extraordinary as the material from which they were fashioned – their durability being the least of it. For gazing through them, John could see the world as it really is, uncaparisoned, polarized free of all trappings and contrivance.

Thus, observed through his lenses, a speeding vehicle might appear as nothing more than a seated driver, devoid of all physical surrounds, ensconced upon thin air as it were, racing down the highway.

On one occasion, John caught sight of an itinerant corpse, the guest of honor in a passing cortege, that sprang from its casket, somersaulted from the hearse, and ran off at a trot – only to be struck down by a phantom DeLorean.

It was under such auspices, then, that John bore witness to the vanishment of LilthyEtta Klatchbustle.

She sat, late one summer afternoon, at a long mahogany table adjoining the poetry section of the Port City library writing feverishly in her notebook – the nib of her goose quill pen making quick little jabs into a small sterling and crystal Victorian travelers’ ink well. Strewn about her on the table were a variety of volumes – poetry anthologies, chapbooks, and hardbacks by various authors (W. S. Merwin, Maxine Kumin, Theodore Roethke, D.B. Viridanstadt, amongst others). Now and then, lost in thought, she’d look up and stare intently at the far wall for a moment or two, then fall back to writing.

She’d been at work like this for some hours and was nearing completion of her manuscript when John Baptiste happened by on one of his habitual library rounds.

Inquisitive as de Torquemada, he’d buried his nose in a treatise by Teilhard de Chardin, the which he found most intelligible when studied through the medium of his fever glass lenses. Indeed, thanks to these, Nietzsche had made sense as an Old Testament prophet, Marx as an apostle of Christ.

Glancing at LilthyEtta, however, John came up short – something about her was changing, transmuting. For an instant, he wondered if he were imaging things, yet the event unfolding before him could not be gainsaid.

It began at first with her hand – her writing hand – that faded from skin tone to a pastel gray, then gradually darkened to the lustrous blue black of her ink well. Her outstretched arm, meanwhile, began to lose distinctiveness, its sharpness of contour – to deliquesce, by degrees, like ice lift out in the sun, the noir of the ink rising upward in a tide that had soon enveloped quite all of her.

Now she commenced a gentle cascade – like burgundy decanted in slow motion – along the nib of her goose quill and onto the pages of her copybook, creating through this a delicate calligraphy, page after page of coruscating verse that exalted the very dust and coffee stains.

And then the tide ebbed.

John snatched the pince-nez from his face and stared hard at where LilthyEtta had been. But like Alice’s Cheshire she’d vanished, pen and all. Collecting himself for a moment, he mused wanly “Sheesh, I’ve heard of pouring yourself into your work, but this…!”

“Where the hell did she go?” he wondered aloud, but the query was met with silence.  If others had borne witness, no one came forward.


Resting upon the mahogany table, however, there remained a solitary volume, a chapbook of poetry by one LilthyEtta Saqueth Klatchbustle. John picked it up and replacing his pince-nez spectacles, began to read.

Somewhere a siren wailed, and street lamps flickered to life. A Stryker hip with a rosary and cassock hurried by on the way to confessional. One might have thought it was closing time.

John thought it had begun to rain.

Posted by Steve H Dougherty at Wednesday, December 17, 2014 No comments: