So what is mindfulness, anyway? Everyone knows expressions like mind your step, pay him no mind, mind the teacher, be mindful of others, etc., but do any of these represent "mindfulness?"

Mind you, nobody really knows! Despite all the hoopla of recent years, there seems to be no uniformly accepted definition of mindfulness. Its one of those expressions French anthropologist Claude Lévi-Strauss (1908-2009) might have described as a “floating signifier,” a protean notion that like tofu has little taste of its own but readily soaks up surrounding flavors.

Even so, with its burgeoning popularity, mindfulness has emerged as the psychology craze du jour, supplanting such earlier fads as est, primal therapy, transcendental meditation, and lucid dreaming -- and has done it with a patina of science to boot!

Like many ideas that capture the public imagination, the mindfulness movement has no shortage of progenitors. Thich Nhat Hanh, a Vietnamese Buddhist leader, is said to have introduced mindfulness to Westerners. Dr. Jon Kabat-Zinn of the Mindfulness-Based Stress Reduction program at the University of Massachusetts Medical Center, is often credited with introducing “secular” mindfulness to the American mainstream.

Kabat-Zinn, considered by some the dean of Zen, defines mindfulness as “paying attention, in a particular way, on purpose, in the present moment, and non-judgmentally.”

Maybe so, but it seems to be good deal more than that. Mindfulness has been applied to the treatment of chronic pain, depression, and psoriasis; caregiving, death and dying; sex and intimate relationships; entrepreneurship, consumerism, and finance; cooking and eating; creativity; sports; activism; parenting and education from kindergarten up; environmental protection; interventions with prisoners; and even war fighting.

And then there’s mindfulness meditation, a tautology if ever there was one.

When it comes to mindfulness, in other words, everyone seems to be playing in his own sandbox.

Not surprisingly, the mindfulness onslaught has caused consternation among Buddhists who fear their religion is being highjacked for self-centered, secular purposes. Others share their concern. In a December, 2014, piece for Salon, writer Sam Harris observed that:

"The rapid mainstreaming of mindfulness has provided a domesticated and tame set of meditation techniques for mainly upper middle-class and corporate elites so they may become more 'self-accepting' of their anxieties, helping them to 'thrive,' to have it all—money, power and well-being, continuing business-as-usual more efficiently and, of course, more 'mindfully'—while conveniently side-stepping any serious soul searching into the causes of widespread social suffering."

And that may not be the worst of it. What if mindfulness in the service of enterprise turns out to be little more than a loosely stuck Band-Aid?  What if it has the potential to work something like prednisone, a powerful anti-inflammatory corticosteroid that can mask the symptoms of serious disease, producing a false sense of health and well-being until its too late? So, for example, bacterial infection “treated” with prednisone instead of antibiotics may appear to improve dramatically until the affected individual suddenly ups and dies of sepsis.

At least for some folks, managing, say, tension and anxiety with mindfulness therapy while ignoring the root causes might lead to an analogous emotional catastrophe: one day the optimistic, upbeat – and mindful – executive; the next, a startling suicide. The best treatment for any malady, of course, is one that eliminates the cause, not merely the symptoms (though admittedly this is often not possible). 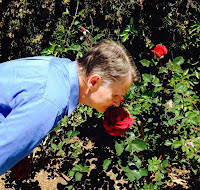 On the other hand, if mindfulness is really about slowing down enough to smell the roses (as seems likely), perhaps it’s essentially innocuous after all.

Not everyone would agree, though. Columnist Judith Warner discovered that “...being fully in the moment, all senses turned on, feeling your hands in your lap and the ground under your feet, is a very good way of not being there at all” – that mindfulness often turns into “extreme solipsism” and is “stultifyingly boring.”

You’d need a touch of the Stepford feminoid not to take Warner’s point.

In contrast, for writer Vivian Gornick the beginnings of mindfulness struck like St. Paul’s epiphany. Walking along a country road, she says, “running a movie in my head,...right in the middle of the film, a kind of visual static..cut across my inner field of vision; the ‘story’ began literally to break up before my eyes and then…terminated.. At the same time an acrid taste began to fill my mouth and, deep within, I felt myself shrinking from: I knew not what.”

Succored by nascent mindfulness, or something very much like it, Gornick eventually gives up daydreaming (watching movies in her head) and learns to live in the moment.

Well, hoorah (at least for the moment)!

The Zen-iest mahatma of them all, however, has to be India’s Mohandas Gandhi. He had young women from his ashram, some of them teenagers – one, his grand-niece – sleep naked with him. In part this was to keep an old man warm, but it was also imagined as a test of his vow of “brahmacharya,” or total chastity in thought and deed. If he could manage to be non-judgmentally mindful of nubile young female bodies – yielding, curvaceous thighs draped over his stiff old gnarled ones – without losing focus, he’d be a true Zen master indeed!

Supposedly Gandhi succeeded – no manifestations of the inflatable obelisk – but so what? He might just as well have been dead.

For me, all these postures seem a bit over the top. Tuning in non-judgmentally to one’s thoughts, feelings, and surroundings on an ad hoc basis does seem like a good idea, but why make a fetish of it?  I’d even suggest letting your mind go totally blank now and then, thinking about absolutely nothing at all, entering into a sort of lucent slow-wave, non-REM state of consciousness, as it were – the sort of state in which you might find yourself during speeches at a political convention.

By the same token, watching movies in your head isn’t necessarily all bad – as long as they’re not B-grade films. Many of life’s everyday tasks can be accomplished on autopilot, giving one the opportunity to think creatively, dream the impossible dream, or just seethe silently in anger if that’s your thing.

I propose we dub the creative side of this absentmindfulness – taking mental leave of your surroundings in order to be proactively imaginative within your own head. Absentmindfulness thus understood would serve as a refuge from the enervations of quotidian mindfulness, mindlessness, or the just plain quotidian. The “absentminded” professor lost in thought over some intellectual conundrum, for example, would now be more properly – and respectfully – regarded as absentmindful.

As for the “I knew not what,” that ineffable something that had Ms. Gornick a-shrinking within, I suspect it was her sense of chagrin over irredeemable temps perdu – a regret we all feel occasionally, especially after watching bad films. If that’s what you’re experiencing right now, please feel free to comment – but be mindful of what you say.

Email ThisBlogThis!Share to TwitterShare to FacebookShare to Pinterest
Labels: Mind your Ps and Qs