Claspacia of Knossos (c. 600 B.C.) was one of those truly focused women of antiquity who, once she’d made up her mind about something, became more or less intent on seeing it though. 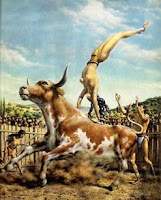 She was born on the isle of Crete, the daughter of King Risiblestes the Solemn and Queen Gaugamela, who lavished upon her every sort of childhood beneficence. From an early age she trained, not only in music, philosophy, and literature, but also in sport and the martial arts – the javelin, bow, and in Minoan bull leaping (the latter later more of a metaphor).

Her greatest talent, however, lay in the wrestling ring. So skilled a grappler was she that amongst the men of Crete, few dared face her. Before the match had scarcely begun, challengers invariably fell prey to her Scythian suplex as the tactic was known, applied with the speed of a snake strike. Not for nothing was she called the Python of the Aegean.

Claspacia’s notoriety for fierceness, however, only enhanced her celebrity and personal appeal, for Greeks young and old flocked from hither and yon – Macedonia, the Peloponnese and from around the Cyclades – eager to engage her, hoping to win her favor and more. Leonidas, king of Sparta, sought her for his elite Hippeis, or cavalry, but in a dazzling display of the bull leapers’ headscissor, she defeated the horse soldiers to a man astride their mounts.

“Better to send these steeds into battle riderless than saddled with this lot,” she told a chagrined Spartan king.

In Athens, Praxitleles attempted to sculpt her in marble, but she wouldn’t sit still.

When the famous sophist Protagoras of Thrace tried to daunt her with logic, she instead persuaded him fluently that nothing can be greater than the sum of its opposites divided by pi (though the conundrum thereafter hounded him doggedly).

A succession of celebrity rounders, among them the scoundrelous Sisyphus of Corinth, came forward, brazenly seeking a roll in the hay. But this sort soon left disappointed, so shorn of ambition that it would have been impossible to imagine them happy.

Still, Claspacia reveled in such pretexts and challenges and missed no opportunity to flaunt her feminine form, the which had without a doubt given rise to much of the excitement.

For truly a work of art was she, an exemplar of the golden mean in both strength and beauty. When she stirred, the muscles of her limbs rippled like a mountain brook. The twin thews of her belly undulated sinuously like a marauding constrictor, striking awe into wrestling opponents.

So flawless was her bottom that adoring fans, choosing sides, nicknamed it Euphrosyne and Thalia and engaged in heated debate as to which might be the more perfect. Her exquisite breasts, Elysia and Ambrosia, became virtual objects of veneration.  The alabaster radiance of her skin was incomparable. Such was the measure of her loveliness that admirers could scarce take it in at a glance but had instead to linger over each feature in its turn in order to consider the virtues.

Upon this scene there appeared one day a stalwart of cunning and purpose, young Lepclepides of Thebes, son of Epaminondas, resolved to prevail over Claspacia at any cost and thus claim her hand in marriage. It was bruited about, moreover, that to bolster his cause he’d enlisted the aid of Aphrodite, goddess of love and beauty. Having made known such intent, however, he like his predecessors succeeded only in inspiring in Claspacia a stubborn resolve of her own: the desire to see him thwarted.

“I hear you’ve been lobbying Aphrodite,” she taunted, “but don’t think you can distract me with a few golden apples. I tend to stay focused. Believe me, when we meet in the ring you’ll fare no better than Peleus against Atalanta.

If by the wiles of the goddess you succeed, for her mischief knows no bounds, you shall indeed have my hand in marriage.

But if through Athena’s charity you fail, as surely you shall, you must flee like the winds of Aeolus ere my father the king command you review his new novel, writ by His Majesty’s own hand withal, The Riddle of the Salpinx."

“No, salpinx – gynecologists are acclaiming it. Now do you see what you’re up against?”

Yet despite even the prospect of torture, Ledclepides remained undeterred. Knowing Claspacia to be uniquely formidable, he had not arrived unprepared. During his journey to Crete, he paused at Delphi to inquire of the Pythia how best to overcome an opponent so daunting. The response had been typically Delphic:

“He who possesseth the milk of Medusa shall win for himself the hand of purest alabaster.”

“Milk of Medusa?” Lepclepides grimaced. “How on earth do you get milk from a gorgon?”

To learn more on the matter, he turned to his long time friend and confederate, Isosceles of Sparta who lived not far distant on the banks of the river Eurotas.

Isosceles, by nature more pastoral than martial and generally possessed of sound judgment, had nonetheless for a time been entangled in a romantic triangle with identical twins, Helen and Clytemnestra. On account of this – the Dioskouri, Castor and Pollux, being twins themselves and sacred to Spartans – he had come to be regarded as learned in courtship and distaff affairs.

“It really pretty simple,” he told Lepclepides. “You get your sample of Medusa’s milk by explaining your situation to her, asking her courteously, and bringing along a breast pump. You ought also bring her an offering or present. She’s not as fearsome as she’s made out to be. Indeed, if you want my opinion, she’s rather attractive – hot, actually! Sure, she’s a bit unusual – her hair dresser’s a herpetologist and she’s dating a snake charmer – but so what?”

“But wouldn’t I be turned to stone just by looking at her?” Lepclepides objected.

“Nonsense,” replied Isosceles, “that’s the biggest part of the myth. Medusa possesses a bodily essence – concentrated in her milk, by the way – that’s absolutely narcotic. So if you get near her, you’ll likely end up, not turned to stone, but just good and stoned. Isn’t it amazing how such notions get lost in translation?

Anyway, what you must do is spike Claspacia’s wine – she drinks that Commandaria label from Cyprus – with gorgon’s milk and then bide your time. One sip and she’ll go out like a candle, hit the grappling mat dead to the world. Then you can pin her at leisure and claim your victory.”

In the event, things came to pass at the Knossos arena much as Isosceles had described – with the exception of one detail. Lepclepides for good measure dabbed himself with the gorgon’s milk so that Claspacia would receive a booster shot just as they began to tussle. But, of course, this ill-advised treatment also drugged him. Reviving before she (due to a smaller dose), however, he pinned her without a fight and was duly declared the winner.

True to her word, Claspacia gave him her hand in marriage – but with a devious twist of her own, for she, too, had been thinking ahead. The hand she proffered was one that Praxitleles (Claspacia had finally managed to pose) had marvelously carved in stone, an exact rendering of her own left hand.

“I promised you my hand, Lepclepides,” she said laconically. “Espouse it if you wish. By Hymenaios, I believe the wedding band is even a fit!”

Too stunned to be angry, Lepclepides realized he’d been completely outfoxed.  “By Koalemos,” he thought, “I succeeded in getting milk from a gorgon only to be undone by a simple synecdoche!”

“May I ask one question?” he said, gazing dejectedly at the replica. “Is this figurine carved in marble?”

“No,” replied Claspacia, “its done in alabaster. Why do you ask?”

Wringing his hands (all three), Lepclepides turned and trudged off without answering.

Staring after him Claspacia waxed pensive. He’s really rather sweet, she told herself, and not bad looking. He’s also passionate, persistent, and ambitious yet still simple enough not to pose too many problems. Besides, I could always send him to Delphi. Maybe that geek is my Greek!

And sure enough, before the day was out, she’d asked for his hand in marriage.

Lepclepides, overjoyed, accepted at once and this time didn’t ask questions.