I’d visited France many times but it had been awhile since Paris and le Midi. As I discovered last month, much has changed.

The French look different now. News stories about social unrest over immigration and the influx of Islamic peoples shift into sharper focus when you look around at the crowds. France today appears more Middle Eastern, North African, or Mediterranean than it did in the past. The sight of women in chadors or head scarves and men wearing taqiyahs is now commonplace, not only in large cities but in the hinterlands, too. Indeed, its easy to appreciate that France currently has the largest Muslim population in Western Europe.

It was in 732 AD at Poitiers-Tours, that Charles “the Hammer” Martel, king of the Franks, laid waste the Umayyad Muslim advance into Gaul led by Abdul Rahman Al Ghafiqi – a battle Europeans consider as pivotal for themselves as Americans do Valley Forge or Gettysburg. But today’s Islamic invasion is of a different sort, no longer military but economic or personal,  emanating for the most part from former French possessions like Algeria, Morocco, and Tunisia. As the saying goes, what comes around, goes around.

In spite of this, or perhaps because of it, France seems to have mellowed. Even in Paris, folks appear more casually dressed. Once lavish displays of jewelry by the likes of Piaget, Boucheron, Louis Vuitton, or Van Cleef & Arpels in Place Vendôme look toned down (security could be an issue as well). English is more widely spoken and for the most part, without all the indignation.  Restaurants, too, are more informal with less of the traditional hauteur from maître d’s and waiters. Bistros are gaining in popularity as places to have your dinner.

Still, some aspects of Paris remain comfortably familiar. Take this millinery masterpiece (Lady with a Hat) on display in restaurant Le Suffren (84 Avenue de Suffren) the other night. Its proportions bring to mind women’s headgear circa 1911 when hats were at their biggest, sporting towers of panaches (feather plumes, often ostrich) and brims that extended beyond shoulder breadth, all held in place by eighteen-inch hat pins.

Viewed in profile, this Suffren chapeau conceals the face of its owner like a bonnet. Coiled precariously about the crown and back brim, draped nearly into bavolet mode at the nape of the neck, is a mink stole that resembles a shaggy boa. A sprawl of peacock feathers erupts exuberantly from the front suggesting a Cleopatra parasol borne by an unseen attendant.

The four-photo montage, a kind of Warholian précis of Renoir or perhaps Degas, I fancy, chronicles the action. The woman gazes principally forward through a large paned glass window giving on the street, the movement of her head seemingly constrained by the hat’s sheer mass. Her right arm and wrist gracefully superintend a cigarette, the smoke from which is almost imperceptible as though the cigarette were unlit, displayed only for effect.

Or perhaps the smoke, like my gaze, is simply constrained by the hat’s extraordinary field of gravity. Indeed, at first glance, I briefly lost all interest in my plate and everything else but the hat.

Who is this woman, the bearer of this mighty crown? A chanteuse? A painter? An actress or poet?  A courtesan perhaps?

For all one knows, Our Lady of the Extravagant Headdress could already be well on her way to notoriety, propelled by perfervid writings on sexuality and feminism with an assist from portraiture by one of her artist pals. Or like Natalie Barney, she might be better known for her many romances than for her writing or salon.

And it doesn’t necessarily end there – possibilities yet abound!

Simone de Beauvoir and her long-time companion and collaborator, Jean-Paul Sartre, had an arrangement they dubbed the “trio,” in which de Beauvoir would seduce her students and then pass them along to Sartre. In the novel, She Came to Stay, de Beauvoir explored her convoluted relationship with Sartre and how it was affected by the ménage à trois – or in the case of the deal they cooked up with the Kosakiewicz sisters, the ménage à quatre.

Haight-Ashbury, even in its hay day, couldn’t hold a candle to shenanigans like these (except maybe at the Blind Pig Ashram).

Bizarrely, some twentieth century salonistas like Stein and Barney were Fascist sympathizers, which ought to tell you something – at least about the depth of their political perception. One could but hope that Our Lady of the Extravagant Hat wouldn't be in cahoots with, say, Al-Qaeda!

Still, even Muslim women don’t swaddle their heads like this.

For me, it’s tempting to speculate about literati who might frequent our hat lady’s salon. Presumably it’d be a compelling invite, what with free booze and conversation that reliably turns to sex and politics.
Guest list:

Lady Gaga in a baloney cloche by Oscar Meyer?

Miley Cyrus in full voice and complete undress astride a wrecking ball?*

Luc Sante with his latest take on Paris?

Bohemian Clubbers fresh from their other saloon?

And what of the ever-elusive ("as scarce as J. D. Salinger at a press conference") poet LilthyEtta Saqueth Klatchbustle? Would she grace this salon costumed in antique ancestral muslin, say, and in voice mellifluous, read from her chapbooks as though she were conversing with the dead?

You have to wonder.

* Sound over the top? At one of Natalie Clifford Barney’s salon sessions in the early 1900’s, Mata Hari rode in as Lady Godiva on a white horse harnessed with turquoise cloisonné. 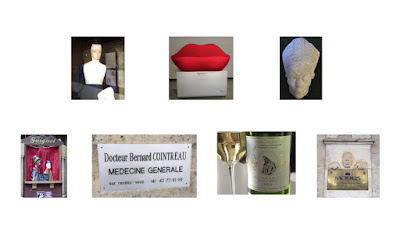 Email ThisBlogThis!Share to TwitterShare to FacebookShare to Pinterest
Labels: With feathers