Narcissism, Hibiscussism, and the Internet

Are you a narcissist? Probably. Everyone is to some extent, and that’s not necessarily bad. Displaying self-confidence that’s in line with reality – “healthy narcissism,” you might say – is normal. 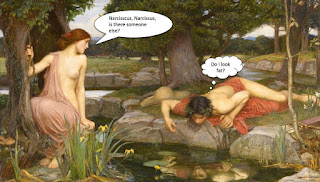 In Greek mythology, Narcissus was a handsome young man who, having caught a glimpse of his reflection in a pool of water, fell madly in love with himself. So fixated upon his own likeness did he become that he neglected to eat. Even the passionate affection of Echo, a beautiful wood nymph who was devoted to him, could not overcome his obsession. So Narcissus finally died of starvation, still enamored of his own – by then presumably emaciated and haggard looking – visage.

Here one has to take issue with Sigmund Freud, for such a clinical history sounds suspiciously like anorexia nervosa. Could it be that Narcissus wasn’t a narcissist after all, but an anorectic?

Still, obsession with beauty, or at least with the self, remains a plausible interpretation of the story.

Since the turn of the century, psychologists warn, society’s narcissistic tendencies have been increasing even as the nexus with beauty gets lost in the shuffle. In pop culture, you find reality TV programs, celebrities who hire "fake paparazzi,” and song lyrics that feature a predominance of first-person singular pronouns. Similar trends are apparent in popular print media.

And the internet has only been fanning the flames. Now there are entire online “nations” that consist of a single individual, the head of state. Talk about solipsism!

Perhaps like me, you’ve noticed what may be another exemplar of this: the uncanny number of twinsie or look-alike couples that regularly shows up in engagement announcements, wedding notices, and celebrity spreads. Are these twinsies likewise a symptom of galloping narcissism or do they represent something else?

Much ink has been spilled about the factors that go into mate selection. Not surprisingly, culture and ethnicity play a big role. Beyond that, there’re a few more or less coherent theories –  e.g., social homogamy, complementary needs, developmental, ideal mate, etc. – that aren’t necessarily incompatible with one another.

In American culture, mate seekers tend to focus on objective considerations like income, education, and social position along with physical attractiveness, self-confidence, intelligence, maturity, and responsibility, among other factors.

Yet it turns out that folks are surprisingly bad at knowing what they want from a relationship! Studies have shown that singles do poorly at predicting what later turn out to be their actual relationship preferences. According to OKcupid’s, Christian Rudder, "People appear to be heavily preselecting online for something that, once they sit down in person, doesn’t seem important to them.”

In the event, folks usually mate with others who have similar political attitudes, lifestyle values, personality, appearance, and ethnicity. What’s more, dating choices are "ninety-eight percent a response... to market conditions [i.e., who’s around to date] and just two percent immutable desires.” To be sure, the internet has been expanding what we mean by the “market.” Between 2005-2012, about 35% of Americans met their spouses online.

Clearly, a potential side effect of all this could be a boost in the chances of meeting your online doppelganger, someone who looks very much like you. Judging from all the twinsie couples, you might think that for many folks finding their twin could actually be a priority.

"When you have a face that looks more like you, you tend to trust it more and think it looks more cooperative," says Tony Little, a research fellow in psychology at the University of Stirling in Scotland.

Yet curiously, FindYourFaceMate.com, the only online dating service (so far) whose primary objective was to match you up with a look-alike, went bust (it still has a Facebook page).  If people are indeed attracted to look-alikes, why would this be?

The work of Fraley and Marks at the University of Illinois, Urbana-Champaign, may provide an answer. In one experiment, they asked test subjects to rate the sexual attractiveness of digitally manipulated – morphed from 0-45% – composites of two distinct faces, the subject’s own face and that of an opposite sex stranger. Subjects were not told that their own faces were being used this way. Participants who saw morphed images containing elements of themselves found the faces more sexually appealing than control participants who rated the same morphed images.

In another arm of the study, subjects were told that the morphed images contained elements of themselves. Moreover, they were advised that the investigators were interested in studying incest and wondered to what extent people might find faces attractive that resembled their genetic relatives. Control participants were not given this information. This time the study subjects – rating morphed images they thought contained elements of themselves – found the faces less sexually appealing than control participants who rated the same morphed images.

In other words, folks may find overt, obvious attempts to match them up with a look-alike a little too in-your-face. This would accord with testimony from look-alike couples who say that upon first meeting they didn’t consciously appreciate their physical similarities.

In contrast to FindYourFaceMate’s brassy approach, Match.com offers to help you find someone who resembles an ex or a celebrity, either of whom might or might not resemble you. This added subtlety probably makes a difference – even if the enterprise itself sounds a little off kilter.

Thus, mythmakers notwithstanding, it seems unlikely that narcissism has much to do with the match-up of look-alike partners. Indeed, for a narcissist, a look-alike might actually be threatening, represent an unwelcome competitor who shifts attention away from himself, steals his thunder. (For narcissists, relationships have a lot to do with dominance, disregard for personal boundaries.)

For the blossoming phenomenon of the twinsie couple, therefore, I’d like to propose the term, hibiscussism, after the hibiscus flower.

There are several good reasons for this. First, hibiscussist twins are charming – they’re often referred to as cute couples – and now that there’re so many of them, they warrant a category of their own.

Second, the hibiscus flower is the flower of the Hindu goddess Kali – goddess of Time, Change, Power, Creation, Preservation, and Destruction – which for marriage would pretty much cover the waterfront.

Third, the hibiscus can be made into a flavorful medicinal tea that lowers blood pressure, always important when you’re dealing with twins – or they’re dealing with each other – believe me! Also, the seeds and leaves of the hibiscus have anti-oxidant and anti-inflammatory properties that might help keep marital discourse civil.

Finally, adopting hibiscussism would provide an opportunity to expand upon the Narcissus narrative via testimony from Narcissus’s more levelheaded twin, Hibiscus. This might help further illuminate the nature of narcissism, something that psychiatrists are now calling into question anyway and certainly an area that needs further investigation.

It wouldn’t be the first time someone though to embellish a myth.

Email ThisBlogThis!Share to TwitterShare to FacebookShare to Pinterest
Labels: Do I look fat?