The Joy of Guilt

“A guilty conscience needs to confess. A work of art is a confession.” 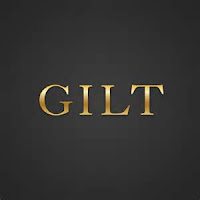 I’m behind on this blog and feeling guilty about it. About that and much else.

But what fun! Guilt isn’t necessarily bad if you look at it in a positive light. For one thing, it provides welcome respite from the tedium and sanctimony of cloying notional innocence. At its best, guilt encourages you to straighten up and fly right, correct your missteps and errors. At its worst, of course, its voodoo for your mojo.

Innocence, on the other hand, is a snare for the unwary. Why does there so often seems to be a touch of the unctuous and disingenuous about protestations of innocence? “Butter wouldn’t melt in his mouth,” as the saying goes. In the 14th century folks believed that if an accused person were truly innocent, he would float if dunked underwater. They were probably right.

Since guilt tends to shield us from the subterfuges of wily innocence, it’s fortunate we’re all culpable. Indeed, I suspect everyone privately exalts in guilt, for from the ecstasy of guilt flows the exuberance of blame, the vibrancy of transgression, and the delicious afflictions of virtue. In as much as you feel guilty, you are guilty! Fictive innocence is then stripped of dominion and cowers exposed as misguided false consciousness.

Only a zombie would deny the Promethean eagle clawing away at his conscience over something or other – the burned breakfast toast, the missed dentist’s appointment.


“Zak, you must be guilty of…of something.”

-- Captain Chavez (Anthony Quinn) to first mate Zac
(James Coburn) after both are convicted of a crime neither
committed. A High Wind in Jamaica, 20th Century Fox, 1965


But is there no indemnity here, no clemency at all for this state of affairs? What of the very young, for instance? Should they not be deemed innocent on grounds of inexperience and scant understanding of ideas like free will and right judgment? Should not infants at least – despite their wanton extortion of pablum and vittles via threats of appalling squalling – be deemed guiltless?

No way, Jose! We excuse the young, not because they’re innocent, but because if we didn’t, our species would go extinct (and what a calamity that would be). Each of us, regardless of age or station (or species), heedlessly goes about trying to get her/his needs met even if it means self-sacrifice. You wouldn’t throw yourself on a hand grenade unless you expected to get a bang out of it, would you? Self-sacrifice is essentially self-indulgence – the epical basis of all guilt.

Its often been asserted that guilt – the privilege, the duty, and, even the pleasure of it – is of two basic kinds, latent and patent. The former pertains to misdeeds yet to come; the latter, to ones already extant. But this, alas, amounts to a distinction without a difference, of consequence only to pedants, that can lead the rational mind no further. Guilt is guilt, and you’re culpable willy-nilly whatever you’ve done or may do. Looking for exoneration through petty sophistry is a a foolish project and forlorn hope. 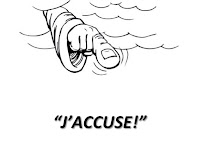 But where does guilt come from, anyway? From fear? From chiseled stone tablets? No, it arises from the principle of Original Decadence, a species of self-indulgence on a cosmic scale, only greater. Absent Original Decadence, there’d simply be no guilt. It follows that guilt and levity likewise go hand in hand since levity is mostly indulgent. Indeed, so much are guilt and levity each other’s boon companions that if you’re feeling light-hearted, enjoying yourself, you’re perforce guilty. (Imagine the divine index pointing at you through the clouds with a booming “J’accuse!”)

Ergo, whilst wallowing in all this blame, you might as well enjoy yourself! Isn’t this what most folks do anyway? It makes life so much simpler*! Indeed, without guilt, there'd be no enjoyment.

While you’re about it, however, do remember to indulge others, too  (you might have to guilt them into it), fun begetting fun, so to say. Faithfulness to the principle of shared self-indulgence, as much as to guilt itself, is your bounden duty, you see. 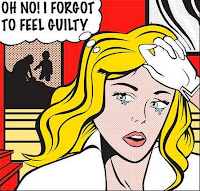 Lofty guilt, like the laws of physics, is immutable and cosmic  so that you needn’t trouble yourself with absolution – which in any case is simply not to be had. Who’s going to shrieve you for running over a stray kitten in the parking lot, for example? Accept your guilt with as much equanimity as you can and just suck it up. Nay, revel in it! Your goal, in other words, should be to shoulder your culpability fully without self-castigation or blame. For guilt is its own reward, punishment meet and sufficient.

If this sounds paradoxical, so what? The only thing worse than a prodigious burden of guilt is no guilt at all. Remember, you have to be alive to be inconvenienced.

His Holiness, the Dalai Lama, is said to have recounted the story of an elderly Buddhist man who approached him seeking instructions for a difficult Yoga pose. On account of the man’s advanced age, His Holiness advised him against it. Thanking the Dalai Lama, the old man returned home and committed suicide in order that he might be reincarnated as a younger man capable of doing the pose. Upon hearing the news, the Dalai Lama felt responsible for the old man’s death and was riven with guilt and remorse. When asked how he’d managed to dispel this guilt, His Holiness replied that he had not dispelled it – that it remained with him every day. “I just continue to live with my heart open,” he said

Even if this story is apocryphal (which seems likely), it does illustrate how guilt is essentially unassuageable. Because unintentional missteps like the Dalai Lama’s tend to sharpen the focus, to refine one’s sense of culpability more than do preventable acts, they are of greater heuristic merit and and should be esteemed as such.

Absent large dollops of self-deception, you’ve no choice but to embrace your guilt and forge ahead as best you can. If there’s aught you might do to make amends, fine, but consider that absolution (if you fancy it available) is a treacherous commodity fit only for the faint of heart.


Finally, I must confess that my exegesis of guilt, arguably well and truly innocent of all truth and reason, could be so much quantum twaddle. But what would it matter? Since when has the idea of guilt ever made sense anyway?


*You’d need a law degree to grapple with Judeo-Christian ideas of guilt. Most priests and rabbis are essentially lawyers.