From the Rock Oil Coast 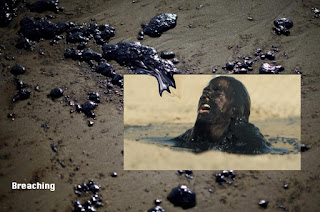 Earth is a leaky place. From its crinkled crust spew divers gases and liquids, hot and cold.  I’m not talking about faulty water mains or broken gas pipes that flood streets or cause explosions. I mean natural leaks or discharges like lava, water, crude oil, methane, carbon dioxide, radon, helium – the list goes on, especially in connection with volcanic eruptions and oil seeps. It’s almost as if the planet itself were an organism occupied with ingesting, metabolizing, and excreting.

Perhaps this is one reason Earth and her various topographies have been so often anthropomorphized. To the ancient Greeks, Earth was Gaia, the primal goddess. To the Blackfeet tribe of North American, the Rocky Mountains were the "backbone of the world.” The German astronomer Johannes Kepler believed volcanoes were ducts for Earth's tears, though to moderns they’re more apt to suggest passages into Earth’s great stomach, as do caves.

And much as prospects look grim, you still have to eat, especially if you happen to be the Devil. Thus, there’re at least three “Devil's Throats” out there: an underwater cave formation near Cozumel, Mexico, that plunges the intrepid scuba diver to 135 feet; one of the cataracts of Iguazu Falls, Argentina, into which about half the volume of the Iguazu river flows; and a humungous cave mouth near Devin, Bulgaria, that swallows up a white water rapids.

Parenthetically, it seems to me that with so many Devil’s Throats about, there ought be at least one, say, Gullet of the Guileless where, led on by kindly light, ecstatic hearts might gather for the final flush, the splosh into Paradise. I doubt planet Earth takes sides in such matters, so this would help even the score.

Since wetlands filter and purify ground water, they’re often referred to as the “kidneys of the earth.”

Then there’s Martin Luther’s observation about the nether end of Earth’s anatomy. Anticipating his own imminent demise, Luther is said to have exclaimed, "The world is a giant anus, and I am a ripe stool ready to be squeezed out of it.”  Which might lead you to wonder whether effluences like springs, geysers, and artesian wells ought figure in Luther’s scatology, too – through some connection to Earth’s “kidneys,” say.

Finally, one photographer fancies he’s discovered the “womb of Mother Earth” in Sedona, Arizona. Maybe so, but you might have expected a wetter climate for it.

Although some folks look at petroleum-bearing strata as being part of Earth’s stomach, to me such collections seem more akin to abscesses: they’re fraught with bacteria and constantly oozing, especially around Santa Barbara, California. 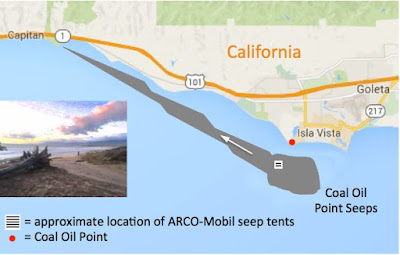 California has hundreds of naturally occurring crude oil seeps, the largest of which – it also happens to be the second largest in the world after Azerbaijan’s Caspian Sea seepages – lies in a square mile area of seabed three miles off Coal Oil Point in the Santa Barbara channel. Here can be found some six hundred seeps, with about that many again scattered across other parts of the channel.

Prolific to say the least, this underwater seep ranch releases on the order of 100 to 150 barrels (20 to 25 tons) of liquid petroleum per day – and has done so for the last several hundred millennia. Microbes apparently consume most, but not all, of the compounds in this oil, while other fractions sink to the ocean floor.

The remainder of the oil produces a miles-long slick that when degraded by evaporation and weathering, winds up as tar balls, or asphaltum patties, mostly on beaches from Coal Oil Point to El Capitan, but also as far south as Los Angeles. Some of these tar balls coat rocks and cliff faces, but the smaller ones have a tendency to lodge just below the surface of beach sand. So you step on them without actually seeing them, and the evidence sticks to your feet. Indeed, tar on the soles of beachgoers is so common around here that its been proclaimed a local tradition.

Be that as it may, the tar-stained feet thing holds about as much appeal for me as Scott Adams’ Elbonian mudscape. I’d wear my Wellies to the beach even if I were otherwise planning to show up naked.

Yet perhaps I’m missing the boat! Could it be that wallowing in crude oil can actually be good for you, even pleasurable? Spas in Naftalan, Azerbaijan, charge $200.00 for a ten-minute soak in naftalan, a heavy crude that’s nearly fifty percent naphthalene. Naphthalene is the active ingredient in coal tar soaps (also in mothballs) used to treat psoriasis and possibly useful for arthritis as well. But don’t try this at home, especially with anything besides naftalan or for more than ten minutes at a time. Regular crude oil has many known or potential toxic effects (actually, naftalan may, too). If you want to get down and dirty, go with mud – nice, clean mud – and wallow as long as you like.

Liquid petroleum isn’t the only hydrocarbon that leaks from the seabed around here. So does natural gas, mostly methane, into Santa Barbara’s atmosphere – in years past, about forty tons per day along with some nineteen tons of other organic gases (ethane, propane, butane and higher hydrocarbons). This is why Santa Barbara County’s air quality has traditionally violated both state and federal ozone standards. In 1990, the seepage of natural gas in this region of the coast amounted to twice the hydrocarbon air pollution released by all automotive traffic in the entire county. Even today sometimes when the wind is right, the Santa Barbara coast smells like an Exxon refinery.

In many places around the world, natural gas seeps are lit to create “eternal flames,” some of which are tourist attractions. Burning off fugitive gas this way (flaring) yields carbon dioxide, which is less toxic and 20 times lower in greenhouse potential than methane, but aside from tourists, that’s about all you can expect from this method of control.

In contrast, an underwater seep, easy to locate by its bubbles, affords the possibility of trapping the gas and marketing it. In 1982, the ARCO and Mobil oil companies sank a 50-foot-high, 350-ton steel “seep tent” 220 feet onto the sea floor in the Santa Barbara channel off Coal Oil Point, designed to harvest volatile hydrocarbons. The trapped gas is piped ashore for processing and commercial sale; oil that collects in the tent is periodically siphoned off.

Over the decades since the tent’s installation, however, extraction of liquid petroleum by Santa Barbara’s offshore drilling platforms has caused a significant decline in the seepage of gas from this hydrocarbon-rich area, and the seep tent’s production has fallen. Thus, it will probably be decommissioned in the near future for want of sufficient output and abandoned to become a reef.

And what a waste that will be! For it means forsaking a fine example of avant-garde tent architecture and leaving a prime piece of real estate high and dry!

I’d like to see the seep tent converted to a fraternity house. It’s close to the university (at Isla Vista), spacious (20,000 square feet), sound proof, out of sight, and designed to deal with large volumes of waste gas. In order to exit the premises, frat boys would first have to decompress, so there’d likely be fewer campus behavior issues. Also, nitrogen narcosis is as good as an alcohol binge, free of charge, and not illegal for minors.

Sure, some pledges might not want to get their feet wet, but for the ones who did, there’d be no place to go but up!

And how could a gaggle of, say, Kappa Alphas be any worse for the channel than the  ‘69 oil spill?


“Always keep your watts about you, your oil slick, and your gas natural.” 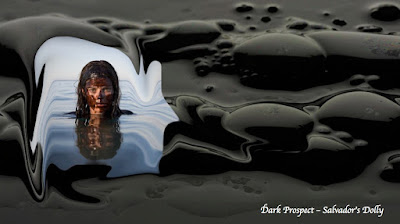