Recently, I downloaded Touchnote, an app that lets you send customized postcards anyplace in the world that has a functioning postal system. Just for fun and to demo the service, I sent a Touchnote card to a friend of mine in Pasadena while I was visiting the Getty Center in Brentwood.

A few weeks later, by way of reply, he sent me a conventional postcard he’d picked up at the Prado Museum in Madrid fifty years ago and kept all this time as a souvenir, a reproduction of Francisco Goya’s famous painting, La Maja Desnuda (The Nude Maja).

“Your Touchnote is one of those cheesy
Getty imitations,” he wrote.

Maybe so, but feel free to decide for yourself!

Be that as it may, the Nude Maja (c. 1797-1800, oil on canvas), even reproduced on a postcard, is a striking piece of work and a nice example of Goya’s “playful and mischievous” side, especially when viewed in context with its twin, the Clothed Maja, painted by Goya a few years later.

Both pictures, on display at the Prado since 1901, were probably commissioned by Spanish Prime Minister Manuel de Godoy, Duke of Alcúdia, who hung them in a special cabinet reserved for his collection of nude paintings. (Velásquez’s Rokeby Venus, c. 1647–51, was also part of this trove.)

Godoy, a notorious womanizer, hung both painting – the clothed one in front of the nude – in such a way that by means of a pulley system he could dramatically expose the naked version to startle and titillate guests once they’d seen her with clothes on. 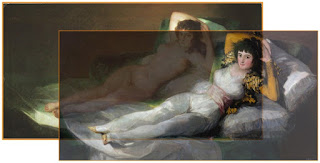 But if Godoy was running a peep show, Goya, I believe, was up to a little mischief himself. For taken together, the paintings, intended to be viewed in tandem one after the other as noted, add up to an artistic prank played on the viewer, a painterly tour-de-force achieved through anatomic distortion and trompe-l'oeil windup.

First off, you’d get a gander (in Godoy’s closet) at the Clothed Maja. Immediately grabbing your attention is her elegant black and bronze jacket highlighted in gold, offsetting her rosy cheeks and lips. She wears a white chemise with a broad pink sash snugged up just below her splayed, almost wing-like breasts. Her gown is diaphanous, arrestingly sheer, almost as though she were clad in no more than body paint, and as the eye moves downward, her pubic hair rendered as shadow – or shadow masquerading as pubic hair – subtly beguiles the gaze. And it’s this feature in particular that primes the viewer for what’s to come next – the Maja in full, frontal undress.

It can sometimes be difficult to tell in works of art whether anatomic distortion is accidental or intentional, and if the latter, what purpose it serves. But as in the case of the Nude Maja, context can be helpful. Confronted with the lady now suddenly naked  – again, in Godoy’s closet, as if by means of a curtain hastily raised – you meet the Maja’s gaze: engaging, playful, and unashamedly brazen. Yet her pasted-on head seems to levitate from the canvas almost holographically or trompe-l'oeil fashion. Cockeyed is one thing, but whoa!

Her chest, abnormally broad, extends upward beneath flowing hair to the appliquéd or photoshopped, levitating head, which now suggests a face wedged into one of those funhouse photo cut-out boards that turns you into a gorilla or a clown or a naked lady, say. Her breasts, set too widely apart with a perkiness that defies gravity, are outspread as though poised for a welcoming embrace – a gesture the arms crossed languidly behind the head seem to eschew. Indeed, the Maja’s arms seem attached rather too high, as though to a neck that’s webbed or, like the chest, conspicuously broad.

Thus, in overall aspect the Maja’s torso and head are unsettlingly, almost comically distorted  (vaguely suggestive, by the way, of a female genetic disorder known as Turner syndrome, though this is likely coincidental).

Goya uses these distortions as a sort of  gonzo ploy to disturb and distract the viewer, to draw his/her attention away from the work’s furry focal point back toward the upper half of her body in order to revitalize interest and prevent the gaze from stalling out at ground zero. Besides, with her hips flexed and bent knees pressed demurely together, there’s something a little anti-climactic about the prospect of the Maja’s small triangle (cf. L'Origine du Monde, Gustave Courbet, 1866), appreciated nearly to the fullest already through the gossamer, fluffed-up cotton candy wisp of a gown seen in the clothed version of her.

Perhaps also the Maja’s distorted torso and cockeyed, levitating head are there to remind us that she’s a distinct personality, not merely an object of sexual desire. Perhaps, too, these comic elements are simply meant to add levity, an appeal to the viewer not to take the work too seriously – a good idea, maybe, if you’re a pioneer in pornography whose work is going to attract the attention of the Inquisition.

“Lighten up, Torquemada, she’s not going to bite you,” one can almost hear Goya saying.

In any case, Goya’s artistic stratagem perturbs and energizes, prevents the work from descending into ho-hum triviality, the typical fate of so much of pornography.