The Blue Lagoon: Heaven and Hell in Iceland 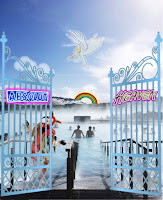 “Hell is other people!” French philosopher Jean-Paul Sartre famously exclaims in No Exit, his existential play set in the metaphorical hell of a closed room populated by three individuals condemned to spend eternity in each other’s company.

Sartre had the notion that the gaze of others, observation by others, somehow deprives one of one’s freedom, locks one into a particular way of being, thus making one weak and fragile, a subject. So an eternity of such scrutiny was an idea of hell.

Yet Sartre himself hardly eschewed the limelight. Like the pop star who flies into faux dudgeon at the sight of paparazzi but somehow makes sure to wind up in the viewfinder, he had a devious propensity for headlines. Even his refusal of the Nobel Prize for literature may have been a publicity stunt. You wonder if for him, existential angst didn’t somewhere run headlong into narcissistic self-absorption.

Indeed, for most of us, the regard of others is what keeps us sane, prevents our descending into self-deception and delusion. When you’re about to go off the deep end, isn’t it typically others, your friends, family, sometimes even strangers, who restrain you from the brink?  A balanced, realistic view of oneself must to some degree take into account what other people think. Sartre’s solipsistic perspective is apt to be more than a little prejudicial, and taken to extremes, a conduit to lunacy.

In the end, despite being given an opportunity to escape, the three characters of No Exit resign themselves to an eternity of togetherness. Even Sartre, it seems, couldn’t get his head around the idea of perpetual solitude no matter how free it might make him.

Which brings me to my point: what seems like hell at first might begin to look better, even like heaven, later on. And visa versa, of course. Heaven and hell can be hard to tell apart.

Indeed, philosophers and clerics have debated forever about the nature of hell and heaven. For some, they are actual places, whether temporary or permanent; for others, merely states of mind or spirit. Modern physics asserts that no information about the body or mind is preserved after death so that heaven and hell could just as well be inventions of Marvel Comics.

For my part, I believe there is a physical heaven – in a black lava field southwest of Reykjavik, Iceland, of all places! It’s a geothermal spa called the Blue Lagoon. And though you don’t have to be dead to get there, who knows? For some, death might very well be part of the journey.

The Blue Lagoon, you could say, is an accident of industry, a byproduct of the Svartsengi geothermal power station.  This facility uses brine superheated to 464 °F by a mantal plume 6,500 feet below ground (hell down there) to generate electricity and pipe hot water (via heat exchanger) to Reykjavik twenty miles distant. Effluent from the plant, rich in minerals like silica and sulfur, is continuously pumped into a waste water lagoon, the blue one, at 99-102 °F, maintaining a depth of 3-4 feet and completely exchanging the lagoon’s volume about every two days. Silica suspended in the water renders it an opaque milky white. Sunlight refracted by the silica creates the lagoon’s eponymous pastel blue.

The way the spa manages its guests is a marvel of near celestial wonder. For starters, you have to have a reservation. Upon arrival – after standing in line with the rest of the faithful (or patient) for what already seems like eternity – gatekeepers vet your credentials. Deemed suitable for admittance, you’re issued a plastic bracelet with an electronic chip for identification purposes and sent on your way to a sanctum of communal showers (segregated by gender, however). This is a sort of cleansing purgatory where earthly impurities are washed away like sins before you enter the lagoon.

After a good dousing, you walk down a flight of steps, then pause for a moment or two to sort out the three-fold way – pick a path for the final leg of your journey into the salubrious blue.

The first path leads to an unobtrusive indoor incline some eight feet or so wide that continues out through a set of low plastic curtains into a secluded estuary of the lagoon, just the ticket, perhaps, for anyone who’s been feeling the chill – agnostics, say, or the faint of faith. For this route permits you to completely immerse yourself in the lagoon’s reassuring warm waters while still indoors before braving the curtains to the cold out yonder.

A second route leads directly through a set of swinging outside doors that give upon a much larger incline, like a boat ramp, which you descend into the water on foot in full view of the assembled host – as though you were making an entrance for baptism, say. This would be the way of the zealot or true believer. 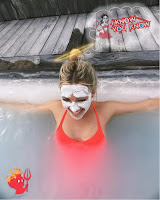 Finally, off to one side, there’s a wheelchair ramp where once submersed, the lame and halt may float free of the confines of earthly affliction.  At my age, it’s a miracle I didn’t have to go this way.

In the event, I was inclined to the indoor warm-up.

Because the lagoon is so shallow, no one really swims in it. You simply walk about. Or if it’s cold and blustery as is often the case, you submerge yourself up to the chin and glide about in an effortless crouch – buoyed up as by faith, in a manner of speaking, or at least by the mineral-laden waters.

Scattered strategically around the periphery of the lagoon are wooden housings accessed by boardwalks that contain hot water feeds from the power plant. When the wind gets intense, you can shelter in the lee of these structures and luxuriate in the heat plume. Feeling the warmth of the flush, it’s as though some benevolent leviathan of the nether waters were peeing on you just to vouchsafe your coziness.

On account of steam rising into the cold air, the atmosphere at the surface of the Blue Lagoon can be nearly as opaque as its waters.  Out of this ethereal mantle, blissful souls emerge as though from nowhere, only to fade again into the mist as quickly as they’d appeared – a natural cadence of being and nothingness, as it were, sans espresso, cigarettes, or Simone de Beauvoir.

It was a rainy, chill afternoon. As the air grew colder and the wind picked up, guests began to congregate in intimate groups around the pump house plumes, sharing greetings and stories of their stay in Iceland. One charming Canadian couple, newlyweds, told of their hassle-free nuptials at a rural Iceland church following arrangements they’d made online. Another Canadian, a military person, spoke more somberly of experiences during deployment overseas.

At a pump house close to the paddle-up bar, a gaggle of young men, apparently in town for an IT convention, sipped drinks from plastic cups and kept an eye out for young women adrift of their moorings.

Afloat for four hours or more in this aqueous Eden, at last it was time for me to leave. Getting out, however, proved to be hell. The prolonged, exertion-free soak in warm mineral water left me dehydrated, flaccid as a noodle, dizzy, and weak. I’d have almost preferred the wheelchair route.

Then there was an obligatory pass back through the purgatorial showers – ironic when you’re returning from heaven. Making my way to the lockers – bypassing the showers – I learned of this exit rinse-off requirement from a demonic-looking attendant or custodian who barked out a reprimand like Cerberus in broken English. You never know when error or corruption may overtake you, especially in Paradise.

Still, heaven had thought of just about everything. Just a touch of my chip-equipped bracelet popped open my locker. There was even a dispenser for shear plastic baggies with which to pack up your sopping wet bathing suit.

The road back to Reykjavik passed under lowering skies and rain showers through miles of jagged black lava, bringing to mind the Italian poet of the Late Middle Ages, Dante Alighieri, and the Divine Comedy, his epic journey through heaven and hell. Unlike mine, however, Dante’s afterlife doesn’t serve Egils Gull lager or feature the LAVA Restaurant. It has more to do, I'd say, with vengeance served cold than fine dining.

Sure, I’d return to Iceland’s heaven-cum-hell in a trice. One of these days. One way or another.