Aesop’s Fables: The Fox, the Mouse, and the Snack in the Grass

One day a Fox was out hunting for his lunch. Fruitlessly, he searched hill and dale, meadow and wood, finding nothing to eat. On the verge of despair, he suddenly came upon a thick crust of  bread dropped in the grass by some careless passerby. As he had not eaten for two days the Fox was quite hungry and at first thought to seize the crust at once before someone else made off with it. But just as he was about to snap up the morsel, he noticed a Mouse eyeing the bread from the door of its nearby burrow.

So the Fox paused.

“Why, hello, honored sir,” the Fox called out to the Mouse. I happened to be passing by with this crust of bread and thought you might enjoy it. I’ve been waiting here this little while to make sure you were home. Winter is coming on, and I imagine you may be hungry. I myself have more than enough to eat. That is why I wish to share this crust with you.”

“Thank you, kindly,” replied the Mouse. “That is very noble of you. It’s not every day one encounters such generosity as yours.”

Still, the Mouse was hesitant, suspecting the Fox of mischief.  Furry woodland folk had a way of disappearing whenever the Fox was about, never to be seen again, and the Mouse did not wish to share such a fate himself.

Yet like the Fox, he, too, was very hungry and eager to claim the enticing snack the Fox had offered him. And waiting until the Fox had departed seemed almost too much to imagine.

Noticing that the Fox had seated himself a considerable distance off, the Mouse ventured “Folks say you are an accomplished jumper, but I can hardly believe the tales of your prowess. How far can you really jump?”

“Don’t believe everything hear,” replied the cunning Fox. “My skill is not so great, especially since I injured a back leg. I can barely jump the length of my own shadow and prefer not to jump at all.”

Believing the Fox’s words and throwing caution to the wind, the Mouse scampered out to grab the crust and retrieve it to the safety of his burrow.

Whereupon the Fox, pouncing easily from just where he sat, dined happily upon both crust and Mouse.

Bide your time, the better to dine – and don’t believe everything you hear.


Aesop's fables, which have been around since about 620 BC, have evolved and expanded over the centuries with a diversity of additions and revisions by a number of authors. Even so, the fables tend to preserve certain features in common. They are short and unaffected, fictitious, yet of practical moral value and true to life.

Interestingly, the fables also tend to feature foxes. A quick survey of tables of content showed the fox to be the most frequently listed creature with the lion a close second.

This story, I believe, displays these features. In any case, it’s surely true to life since it derives from an actual event related to me by a friend, Patrick, who works as a communications coordinator for the National Forest Service and lives in a wooded setting off California Route 154 above the Santa Ynez Valley.

It seems a pair of foxes lives nearby Patrick’s house. Foxes are omnivorous, and these two, especially the male, often approach his front porch in anticipation of a snack.  Patrick obliges now and then by tossing out a granola bar which the male fox typically retrieves without hesitation.

One day, however, as the fox moved in to snatch up the bar, it suddenly froze in its tracks and remained motionless for several minutes. Thinking the fox might for some reason be intimidated by his presence, Patrick retreated into the house to observe him through a window.

For a while nothing changed. The fox remained as still as a post exactly where he was.

Suddenly a mouse darted out from under the porch in a bid to grab the granola. You know the rest.

Kleptopredation is a form of predation in which the predator eats the prey after the prey itself has eaten, consuming both the prey and its recent meal. This is not quite an example of that since neither fox – the real nor the made-up one – waited for the mouse to finish off the snack before making a meal of them both. Maybe this is pseudokleptopredation.

I considered several morals for this story:

If you prefer any of these, feel free. However, since Bide your time.. applies equally to the Mouse and the Fox, it seems the best fit. 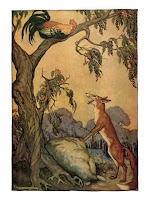 Email ThisBlogThis!Share to TwitterShare to FacebookShare to Pinterest
Labels: Bide your time