The Justice of Dogs


What is justice and what has it to do with dogs? To some these questions might seem odd, but the answers turns out to be quite interesting. For dogs, like other mammals, have a practical or operational sense of fairness that’s not dissimilar to our own even if they don’t think about it in abstract terms.

Amongst us humans, abstract ideas about justice have varied greatly over time and have differed in nearly every culture. One of the earliest examples is from Plato around 348 B.C. To him, justice was having and doing that to which one is best suited. A just man is a man in just the right place, doing his best and giving back exactly in proportion to what he’s received.

If that sounds a bit arbitrary, perhaps it’s because justice, at least in its application, so often is. All too frequently, the administration of justice proves to be haphazard, hit or miss, dependent upon one’s being in just the right place at just the right time. Not every mess, after all, gets sorted
by Judge Judy.

For animals in particular, including man’s best friend the dog, injustice has historically been more often the rule than the exception. Only in recent times with the enactment of sanctions against animal abuse – the criminalizing of animal cruelty in many jurisdictions, outlawing of blood sports like dog fights – and novel research into animal psychology has progress has been made toward the protection of sentient species other than us humans and a better understanding of how the social functioning and behavior of non-human animals might shed light upon our own.

Still, it’s not too much of a stretch to surmise that Plato, say, may have owned a dog and been inspired by it. Perhaps a rescue dog from the pound, wise in its ways, a genial companion like those garrulous interlocutors in the Phaedo, from which he garnered particular insights. Every idea starts somewhere, and dogs as we’ll see possess a sense of justice or fairness that is in certain respects curiously Platonic.

Dogs were the first species to be domesticated and after millennia as our boon companions have become attuned to us in surprising ways. Some suggest that cohabitation with dogs may have significantly improved the chances of survival for primitive human groups, dog domestication thereby contributing to our own evolutionary success. More than any other species, dogs have acquired over time the ability to understand and communicate with us  through a set of social-cognitive skills that seem almost akin to those of human children.

For their part, human children have been known to communicate as though they were dogs as can be seen in this letter from ten-year-old Richard Nixon to his mother:

The two boys that you left with me are very bad to me...I wish you would come home right now.
Your good dog, Richard

Maybe young Richard felt mom was more centered on the family dog than on him and so assumed a canine persona in order to attract her attention. Dogs accorded the status of a family member, a common occurrence in many households, can take up a good deal of attention in much the same way that, say, a handicapped child might. So fairness of focus could conceivably become an issue.

Still, any social worker will tell you that in homes where the pets are well-cared for, so are the kids, probably even Nixon.

You wonder what Plato’s dog would have made of it.

In a recent book, Wild Justice: The Moral Lives of Animals, authors Marc Bekoff and Jessica Pierce argue that morality is basically a set of behaviors – altruism, tolerance, forgiveness, reciprocity and fairness – that cultivate and regulate social interactions and are readily apparent in the interactions of dogs at play.  Morality, they assert, is an evolved trait humans share with other social mammals. While such ideas may make anthropomorphophobes apoplectic, they come as no surprise to pet owners who’ve long recognized that the family dog was pretty much one the of the kids.

Our dachshund, Joe, adopted as a puppy and part of our family for nigh on fifteen years, was a prime example. Until he was housebroken and in the habit of sleeping through the night, he bunked in a cardboard box. After that he moved into our bedroom – and into our bed. Since his short little legs made it hard for him to reach the bed in a single bound, he’d use the cedar chest at the foot as an step. Sometimes, if the night were warm he‘d just sleep on the cedar chest.

Every so often, we’d have to negotiate with Joe over who got the best spots in the bed. Such deliberations usually took the form of a log roll accomplished by hoisting one edge of a sheet or blanket. This may have seemed unfair to Joe at times, but such is the life of a dog.

Like all dogs, Joe loved to play games. Among his favorite was keep-away with rawhide bones. Next to chewing these bones, what he loved most was guarding them from potential thieves – the covetous brigands amongst us intent on stealing those bones – whom he’d vigorously recruit by barking at the rest of the family until he got our attention. He’d casually toss out a bone a few feet in front of himself, then lie in wait for someone to try to snatch it. You’d get down on all fours and creep up, growling as you came: “I’m gittin it,” or “I’m gonna git it.”

Joe would tense, hold his ground, and gaze fixedly at the bone, growling himself. When you finally made your play, he’d yelp and bound forward, grabbing the bone in his little snapping jaws. Why thwarting these mock attempts at bone theft gave him so much pleasure, I’ll never know but it did.

Still, this play was not without its hazards. Joe seriously wanted to win, and you had to take care not to get bit. So it was a good idea to remind him ahead of time not to bite you.

One time he did bite me, pretty hard though unintentionally. When I scolded him for playing too rough, he remorsefully brought the bone over with a hangdog expression and dropped it in front of me by way of apology. Like any dog, he knew that biting too hard was against the rules of play, felt remorseful, and wanted to make amends.

Indeed, dogs understand the practice, if not the principles, of justice quite well. Studies have shown that they’re very careful to signal their intent to play –  to communicate that their subsequent behavior should be interpreted as play, not aggression. And if things get too rough, they’ll apologize and regroup in order to preserve the game.

We nearly always let Joe win at the keep-away game. For another rule, you see, is that stronger members of the pack must handicap themselves or role-reverse in order to allow younger, weaker members a fair shot at winning – fairness here again being a sort of social expectation, not something abstract.

One Christmas Eve as we were distributing presents from under the tree, my wife noticed Joe off in one corner of the living room looking glum. Without saying a word, she went to the kitchen and gift-wrapped one of his rawhide bones. Then with great fanfare, we “discovered” his present under the tree. You never saw such a happy dog! He leaped for joy and rushed over to claim his gift. Clearly, he’d recognized that treats were being distributed to everyone but him and was feeling left out. Just handing him a bone later in the evening wouldn’t have been the same. He needed to receive a gift along with everyone else. It was only fair.

As Joe grew older we got another dachshund, a rescue dog named Henry, to be a sort of companion for him. Henry took to this role surprisingly well, allowing Joe to be the alpha and comforting him by licking his ears. The day Henry arrived, though – equipped with several rawhide bones of his own – Joe felt he had to establish who was boss. He studiedly picked up the largest of Henry’s bones and stalked off with it, pausing to glance over his shoulder just to make sure his brazen ploy was being fully appreciated.

Over the next several days there ensued a series of bone raids as Henry and Joe took turns stealing each other treasures back and forth. Their beds were on opposite sides of the bedroom, each with an adjacent pile of bones. First, one pile would grow while the other shrank, and vice versa.

Finally, I intervened by dumping a large pile of new rawhide bones midway between the two beds. With the market thus flooded, theft of bones somehow lost its cachet.

When it came to milk bone treats, we likewise made sure that Joe and Henry received them in equal portions and at the same time – dogs being quite sensitive to inequitable treatment. Observational trials have shown, for example, that if one dog sees another receiving a reward for doing a task or trick for which he himself has received nothing, he’ll quickly stop cooperating.

Joe and Henry weren’t Yodas of jurisprudence nor canines of letters.  But like most dogs, they had a surprising sense of what was fair and what wasn’t – and on occasion, of how to ignore it. 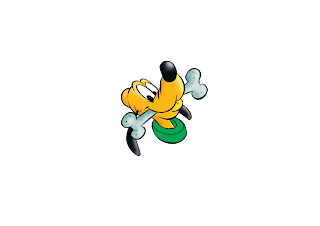 Posted by Steve H Dougherty at Friday, January 26, 2018 No comments: