LilthyEtta and the Goat of Many Colors 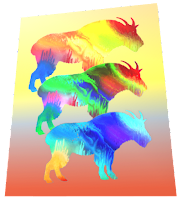 The crossbow bolt – a Mirado Black Warrior # 9H lead pencil by Paper Mate – bored clean through the Pink Lady apple and lodged in the trunk of an old chestnut tree directly behind. The arbalest or crossbowman, one Zeitelin Geist of the St. Columbanus Mountain Goats crossbow team, was so accurate LilthyEtta Van Winkle had little to do but stand still.

The next shooter, Flim de Bockle of the same team, was abysmally off target. To connect with his erratically zooming pencil, LilthyEtta, in a move that for all the world seemed entirely premeditated – keeping a Pink Lady balanced adroitly on top of her head – sprang up and slightly to her left. De Bockle’s pencil then drilled the apple and whizzed off down range, missing the tree trunk entirely.

LilthyEtta was the best there was, or probably ever had been, at this game – playing target prop for the apfelschuss or apple-shot where some intrepid soul teetering an apple atop his head stands in front of a marksman (think William Tell) who attempts to split the fruit with an arrow or bolt from a crossbow.

Unlike most practitioners, however, LilthyEtta didn’t simply stand still. If the arrow were off course, she’d move to intercept it, shifting the apple agilely into its path. No wonder she’d been designated official “goalie” for the St. Columbanus Mountain Goats.

Predictably enough, this preternatural skill of hers brought heated objections from opposing teams and often judges as well.

“What is the meaning of this?” demanded the astonished judge on this occasion.

“It meanth playing two endths against the middle, tho to say, ist a goodth strategy for the apfelschuss,” LilthyEtta replied archly as she chewed a bite from the latest target, a small trickle of apple juice escaping from one corner of her mouth as she spoke.  “Nothing in the rule book says we can’t do it.” (She’d finished chewing.) “Besides, wouldn’t you agree it’s sort of a tribute to Swiss ingenuity?”

“You might just as well claim your…your wristwatch controls the earth’s rotation in order to keep the correct time,” sputtered the judge in frustration.

But his remonstrance fizzled, limp as a damp squib. The rule book was quite specific. Apples used for the apfelschuss had to be of a certain size, pristine off the tree, and set up at specific distances from the shooter. Aside from that there were no restrictions. Indeed if anything, moving targets earned extra points!

So once again the St. Columbanus Mountain Goats carried the day, walking away with top prizes in every category of the tournament.

Not surprisingly, LilthyEtta was as accurate with the crossbow as she was at maneuvering cider-bound targets. As far as anyone knew she’d only ever missed once, the errant pencil lodging in a high school treatise on Goethe, a work in progress of hers that somehow never got beyond  paragraph six nor afterward reached any conclusions. Yet she’d submitted the work as it stood, embedded missile and all, and received an “A” – her professor reckoning she’d made her point accurately enough with the crossbow.

As an arbalest she trained tirelessly with apples tossed by a baseball pitching machine, striking them easily in mid-flight like clay pigeons with either a hand-help crossbow or the shoulder stock type. Despite Black Warrior 9H being standard issue for the crossbow team, she preferred the Swiss-made Caran d’Ache 9H because it sounded more French and seemed patriotic. She despised Swiss neutrality and wished her country would declare war on someone. To her, William Tell was an anti-hero in that he mainly wanted to be left alone and, absent coercion, had no interest whatever in shooting at apples. Still, she admired him for being less filicidal than Abraham. A fan of Bertrand Russell, she’d read Why I Am Not a Christian twice over.

The rallying cry of the St. Columbanus Mountain Goats was “Hemp, hemp, hooray! By Saint Columbanus, pencils away!”

Rather by happenstance, the Van Winkle cheese had come to be invested with an unlikely sort of existential significance at St. Columbanus. During an admiring lecture on alchemy and Rosicrucianism by a visiting professor from Zurich, students mis-heard “philosopher’s stone” as “philosophers stoned” – the lamentable little mondegreen being avidly, if whimsically, seized upon as testament to cannabis’s heuristic and propitious properties. As a result – LilthyEtta’s goal tending skills notwithstanding – the crossbowmen commenced crediting Van Winkle cheese more than their own marksmanship for the team's competitive successes. Likewise for wins by the debate team. There was no shop talk whatever about a boost from the cheese. It was simply taken for granted. And thus it was with much else besides.


The story behind the cheese was that of the family Van Winkle. LilthyEtta’s grandfather, Klaus Van Winkle, had founded the family fortune by developing a goat cheese delicacy prepared from a cultivar of hemp, cannabis alpinicum, that could be grown at the high latitudes of the Swiss Alps. The production process was simple. “Bhang” (powdered cannabis buds and leaves) was added to goat milk curd soon after rennet coagulation. The mixture was then compacted and aged in molds until it could be shipped or sold – typically, no more than an hour or so. Van Winkle called his creation Ziegenfreude mit Cannabisis (roughly, goat delight with cannabis) and successfully marketed it throughout the canton of St. Gallen and beyond.

In addition to Green Label, the brand the firm donated to the priory school, it also made “high octane” Silver Label from the milk of spacey goats whose diet was high in cannabinoids. Silver Label was especially popular with the Swiss hospitality industry.

Before embarking on his cheese-making venture, however, Klaus Van Winkle had had first to win the support of the Abbey of St. Gallen and its patriarchal head, Bishop Hemmroyd of Bayreuth. For the abbey held sway, not only over the town and canton of St. Gallen, but much of adjacent Appenzell, too, and no business undertaking could prosper without at least its tacit approval.

Van Winkle convinced the bishop – the reverend father all the while sampling for himself the herb in question – that cannabis, like frankincense and myrrh, should be considered sacred to Holy Mother Church. The two Marys and Salome, he contented, had been imbued and anointed with cannabis ere they arrived at Christ’s sepulcher on the morning of the third day, the first Easter Sunday. Later, having consumed half a loaf of communion bread drenched in a cannabis butter reduction, even the disciple Thomas, the one who’d had doubts, had been persuaded.

And so likewise was Bishop Hemmroyd persuaded. Not only did he grant his blessing for the sale and distribution of Van Winkle’s cheese, he arranged for him to manufacture cannabis Cheez-It communion wafers for the Eucharist, too – which swiftly became all the rage. Mass in the abbey cathedral overflowed with communicants seeking expedited “peace which surpasseth all understanding” (legalities included).

So many parishioners flocked back to the one true church it appeared in short order that the labors of Protestant reformers in Switzerland like Zwingli and Calvin may have been all for naught. “What’s not to like about the Mass with the grass?” exalted one shrived Calvinist  convert.

As for the hospitality industry, innkeepers throughout the region, whatever their religious convictions, rushed to feature Van Winkle’s Ziegenfreude mit Cannabisis (Silver Label), on their menus.  Its time-slowing effects were so potent they could get by billing guests for more days than they’d actually stayed.

All told, it seemed folks had found contentment in cheese. Souls were saved; money, made. Van Winkle Käse GmbH, prospering as never before, even began eyeing a movie deal for a re-imagined version of Heidi and her cheese-making grandfather.

Such was the world as LilthyEtta had found it.

Not long before graduating from St. Columbanus, an event occurred that cemented LilthyEtta’s standing as a crossbow phenomenon. She was awakened one night in the women’s dormitory by a startling presence – an enormous ibex ram or mountain goat. Apart from the oddity of such a creature being there at all, the beast was peculiar in another respect: it’s coat glowed with serpiginous patches of brilliant fluorescent color that seemed to shift about as though seen through a kaleidoscope. (Cannabis may not have been the only goodie making the rounds at St. Columbanus.)

“You may call me DayGlo,” said the ram. “Fear not for I bring you glad tidings of a great thing that shall be mainly unto the Church but maybe you, too.”

“And wha..what would that be?” managed LilthyEtta, squinting against the blaze of color.

“The library of Abby St. Gallen has become infested with divers heresies in a most devious and deplorable manner,” revealed DayGlo. “With my assistance and the Arrows of Truth – he gave her a sheaf of crossbow pencils so inscribed – you shall expose these falsehoods that they may be purged from their hiding places. Thus shall the library and all Christendom at last be rid of them. And thus shalt thou be blessed amongst high school seniors.”

“Ok,” replied LilthyEtta, “lead on.” She’d decided the present might not be the best time to argue, and anyway her interest had been piqued. Even so, DayGlo was constrained to give her a gentle nudge from behind in order to get her moving.

The abbey library was indeed rife with false teachings. Heretical ideas had intercalated themselves as subtext, like snippets of viral DNA in a genome, into the unsuspecting text  of otherwise blameless but like-minded volumes. Gnosticism, for example, with its emphasis on secret knowledge had crept into a tome by Leo Strauss, a work filled with  ideas so esoteric not even its author could explain them. Likewise, patripassianism, a Western church version of modalism, in a bid to amp up its own import or gravity, had sleazed into Principia Mathematica, Sir Isaac Newton’s treatise on, well, gravity.

And so it went. LilthyEtta, with DayGlo’s guidance, fired pencils of truth into every single adulterated work so that the monks of Abbey St. Gallen could easily identify and elide all inquiline heretical content.

Bishop Hemmroyd was so grateful he proclaimed the LilthyEtta Van Winkle Shooting Trophy to be awarded yearly in LilthyEtta’s honor. DayGlo got an extra bucket of oats.

On commencement day a classmate asked her how she’d made this decision. “Perhaps pencils in flight bore fruit in more ways than one,” she mused. “I think it was motivated, ambitious, single-minded, goal-directed pencils that made all the difference.”