“Unless you are at home in the metaphor, you are not safe anywhere.” 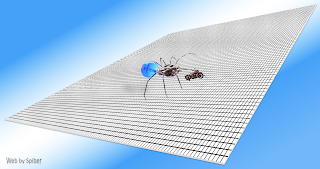 You’re strolling along a leafy path or perhaps across a flagstone patio when splith! – you get a face full of spider web. Clingy, diaphanous strands adhere to your nose and lips like tacky arachnodactylic fingers. With a shudder, you recoil from the thought of a spider on your face or a mouth-full of half-devoured, silk-enshrouded  insect parts. You feel a frisson of dread that you’re trapped: the more you tear at the web, the more enmeshed you seem to become. Never mind that the spider, acutely attuned to vibrations from its web and knowing the difference between, say, a falling leaf and a moth, is probably more revolted than you and fleeing to safety down a silk dragline streaming from its behind.

Under the circumstances it might be hard to appreciate that spider silk is truly amazing stuff with a whole range of potentially useful applications. Weight for weight, some types of silk are ten times tougher than Kevlar, as strong as steel, and lighter than carbon fiber. They can stretch well beyond their original length without breaking. Natural spider silk has been used to make reticles for rifle scopes, small fishing nets, and wound dressings. It’s even been fashioned into violin strings, albeit of limited utility (high C sticks to the G-string, hampering arpeggios).

Unfortunately,  commercial production of natural spider silk is severely limited by the fact that spiders can’t be “farmed” the way silk worms can. Spiders are very territorial and like Eugene Field’s famous cat and pup, they unfailingly eat each other up: they’re hopelessly cannibalistic.

Indeed, creatures that yield workable fibers (sheep, goats, rabbits, llamas, camels, silk worms) are virtually all herbivores.  Were goats not vegan, you probably wouldn’t be wearing that cashmere sweater – even if, reminiscent of hapless Arachne, goats were transformed by the power of science into a source of synthetic spider silk. As indeed they have been! More about this in a bit.

Though spiders can’t be farmed or herded, they can be rounded up and stripped of their textile payload one at a time. Outlandish or impractical as this might sound, two imaginative gentlemen, a Brit and an American, actually did it. Simon Peers, a British art historian and textile expert, and Nicholas Godley, an American fashion designer, both living in Madagascar at the time, hired a team of locals to collect female Golden Orb Weavers in the wild. In a roundup that made Texas cattle drives look downright tame, they eventually roped in 1.2 million spiders to extract their silk. After a protracted tug on their virtue, the ravished creatures were released (though some of them died, possibly of shame).

Four years and more than half a million dollars later, Peers and Godley had produced a magnificent hand-woven, saffron-colored (the silk’s natural hue), brocade cape that’s as much a work of art as garment.

But if spiders themselves aren’t a commercially viable source of silk, why not genetically engineer other organisms to synthesize recombinant silk proteins instead, such as was done with human insulin (e.g., Humulin, Eli Lilly)? By 1990 researchers were able to clone the first fibroin (spider silk protein) gene for just that purpose. Since then, recombinant DNA techniques have been used to engineer fibroin expression from Escherichia coli bacteria, yeasts, plants, silkworms, and even goats, though the recombinant compounds  are typically inferior to the natural ones.

Still, you wonder if these extraordinary spidey nannies could be turned to some other purpose – say, making a super-springy cheese you could pass off as novelty Gruyère chewing gum to tourists in Switzerland. Or a buccal fitness-enhancing bubblegum for tubists and gaffers.

Spider silk proteins are building blocks that can be converted, not just into  fiber, but film, gel, sponge, powder, and nanofiber forms as well to suit a number of different purposes. Indeed until recently, they were used mainly in cosmetics such as moisturizing creams and for medical devices. Coating prosthetic implants – silicone breast implants, hip prostheses, intravenous catheters – with spider silk proteins may make them more bio-compatible and as well as infection-resistant, and clinical trials have been underway.

Compared to many other synthetic fibers, however, artificial spider silk is quite expensive to produce, and it’s far from evident that at least for some applications – designer garments, for example – it offers enough of a performance advantage to justify the premium cost. Nevertheless, several textile startups have moved full steam ahead with a variety of consumer creations.

Using material developed by Germany’s AMSilk, Adidas has pioneered the first sports shoe made entirely of Biosteel spider silk. Biosteel is strong, yet completely biodegradable and fifteen percent lighter than other synthetic fibers. AMSilk also has a deal with Airbus to create a new spider silk-based material for use in lightweight, high-performance aircraft.

Japanese startup Spiber joined with The North Face to make a synthetic spider silk fabric for a proof-of-concept winter jacket, the Moon parka. Sold only in Japan so far, the coat may soon be available in the U.S.

Bolt Threads of Emeryville, California, the fastest growing of the textile startups, is known for its Microsilk. It has teamed up with high-end fashion designer Stella McCartney and outerwear maker, Patagonia. Bolt itself sold a limited run of fifty neckties that were made entirely of Microsilk.

Finally, Kraig Biocraft Laboratories has a contract with the U.S. Department of Defense to research and develop body armor made of the company's genetically modified spider silk, called "Dragon Silk."

This is all fine as far as its goes, but consumer goods like jackets, shoes, and neckties seem rather beside the point. For me, the implications of synthesizing Nature go well beyond such frivolities. The ravages of environmental change that now beset us – an insect apocalypse is already at hand – may one day soon make bio-tech and bio-engineering labs the natural world’s (us included) only remaining hope. Image swarms of scuttling micro-robotic cannibal spiders that rely on large quantities of high grade synthetic silk to trap and dispose of spring-loaded bionic grasshoppers and other such robo-pests (not to mention each other). Only Science might be able to keep them fully supplied and reliably on the job. With a little chemical inspiration – for the scientists, I mean, not the spiders – spider webs could become more complex and original than ever, virtual works of art.

While we’re about it, perhaps we could engineer the fake silk to feel less creepy when it gloms onto your face in, say, the rain forest section of some Plexiglas bio-dome.

We seem well on our way to achieving it all.

Posted by Steve H Dougherty at Saturday, December 22, 2018 No comments: