"Water, water, everywhere..."
Coleridge, The Rhyme of the Ancient Mariner 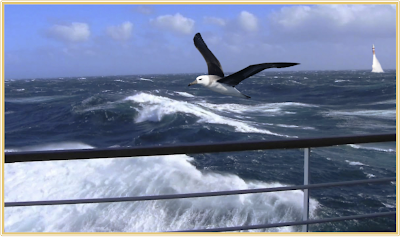 The Tasman sea stretches 1200 miles between Australia and New
Zealand and is one of the roughest patches on the planet for ship navigation. Storms blowing in from the Antarctic churn up thirty-foot waves with winds that can tear sails to tatters.

Even big cruise liners are not immune. We were a day out from Melbourne with two more to go before Milford Sound on the west coast of New Zealand  – “crossing the ditch” as the locals call it – and the sailing hadn’t been smooth.

“The stabilizers are out,” Captain Frigate repeatedly assured us, but it was cold comfort. Our ship, the Gamine of the Spume, rocked and rolled like a fun park pendulum ride. A sudden hard thunk against the starboard side amidships had me grabbing for my coffee cup before it slid to the floor.

The day had been otherwise uneventful, however. I’d attended shipboard lectures in the afternoon – “Entertainment and How to Enjoy It;” “Will the Apocalypse be Beautiful?” – given by a two authorities on cruise ship lecturing. For dinner I’d ordered room service.

Around midnight  the seas began to calm. I chugalugged the rest of my Glenlivet on the rocks (“Better the whisky than the ship,” bethought me) and was just starting to dose off when suddenly there came a tapping, as of someone gently rapping at my cabin door. I sat up with a start, listening intently.

At first there was nothing more.

Then the tap tap tapping began again but now seemed to be coming from the heavy glass door that separated the stateroom from a small outside ocean veranda. Lumbering out of bed, I threw back the curtains and stared in amazement. For before me stood a seabird of considerable proportions crouching on webbed feet just beyond the glass. An albatross!

The bird looked to be about three feet from bill to tail with blackish-gray upper wings, back, and rump, her head and underparts, snowy white, with black smudges around the eyes. Her bill, pinkish with a dark hooked tip, bore two small nasal tubes at its base that looked like (indeed worked like) pitot tubes. Later I learned she was a Laysan albatross, one of some twenty-two albatross species.

Caught off balance, I was first inclined to close the curtains and hop back into bed. But I quickly thought better of it. Albatrosses are known to be quite persistent in their pursuit of a meal from ships at sea, so the tapping, though unusual, was most like to continue. Moreover, the bird had a sort of quizzical look about her, an intelligence of mien, that made me wonder if perhaps she had something to say.

Thus I opened the veranda door to admit her. She hopped straight through, almost gracefully considering her size, and with a perfunctory flap of her four-foot wings, made herself comfortable on a plush sofa cushion. The nautical pattern of the latter was so like the bird’s own coloration you might have thought she was having a go at camouflage.

“No, I’m not trying to hide,” she said with a laugh, anticipating me. “Thanks for letting me in, though. I don’t normally come knocking at ships in the night like this, but it’s been unusually rough out there. Any port in a storm, you know.”

Astonished at discourse thus articulate from a seabird, I groped for a reply.

“Port? I’ve only got Graham’s Six Grapes Reserve,” I finally managed, inanely twisting her meaning in a lame attempt at humor. “Or maybe you hadn’t noticed this is the starboard side of the boat.”

She grimaced, cocked her head, then replied archly. “I could cross to port on the other side of the hall if you like, but it might create a ruckus, and, well, it was you who let me in.”

“No, no, it’s fine, stay put! It’s just that I’m not used to having an albatross around my deck, you see, and was only trying to make conversation.”

Peering the length of her bill, she lowered her head slightly and fixed me in a steely gaze.

“Un-huh…well, perhaps it's time I introduced myself. I’m called Wisdom, and I’m originally from Midway Atoll – you know, the national wildlife refuge. That’s where I picked up this jewelry, too.”

She held up her right leg to display a red plastic tagging band embossed with white numerals.

“Believe it or not, I’ve worn six of these bracelets starting when I was five years old. That’d be 63 years ago now. They tell me I’m the world’s oldest banded bird and that I’ve flown over three million miles. But who’s counting?”

Amazment at the merely preternatural gave way to quotidian surprise.

“Remarkable!” I exclaimed admiringly. “You must have had quite a life. Have you always been solo or have you had time for a family? For a bird your age, I imagine you might have collected a few relatives.”

“You might well ask,” she replied. “Yes, indeed, I’ve had lots of family over the years, including several spouses, assorted lovers, and about forty offspring. But, again, who’s counting? I’m planning to raise another chick this year, too, if I can find the right mate.

My first spouse Albus was a Laysan like me. Every year or two we’d meet up at Midway to raise a chick before going our separate ways back out to sea. We’d been together thirty years when he veered too far south below the Antarctic circle one season. There he ran across an old British square rigger threading the ice pack and alit on the bowsprit for a rest. For no reason at all – maybe just because he could – some depraved bosun’s mate shot Albus dead with a crossbow, a senseless act of cruelty. In a stroke of poetic justice, though, the ship soon came to grief – becalmed at the pole until most of the crew had rotted – nor was I sorry to learn of it. It’s bad luck to mess with an albatross, you know.”

She sounded portentous.  With a sidelong glance, I threw up my palms in a gesture of deference.

“My second spouse Alfonse fell victim to a freak accident. He happened to be roosting on calm seas far out in the Pacific one afternoon when one of those Poseidon rockets, the kind they shoot from submarines, welled up out of nowhere and lofted him skyward. He was never seen again, not even down range.

My third spouse Alfresco was a bit of a gluten and died of a ruptured gizzard after gorging on anchovies.

After that I lost count of spouses and lovers, not to mention my chicks, though I dearly loved every one of them.”

“I bet you’re hungry,” I interjected after a moment’s pause.  “There’s some calamari left over from room service. I believe you Laysans like squid. Please help yourself.”

I handed over the plate.

“Why, thank you!” she squawked with relief – she’d been surreptitiously eyeing the calamari ever since her arrival – adroitly scooping up the fried mollusks with her hooked beak. “We seabirds are fisher folk, you know, and welcome almost everything that swims and is small enough to swallow, especially squiddies. What about you? Are you a fisherman?”

“Alas, no,” I sighed. “Never had any luck with that at all. I once cast my bait amidst a school of halibut, but not a one of them wanted to play hooky. After that, I gave up.”

Wisdom snapped up the last bit of calamari, a small tentacle with three suckers. The food seemed to have settled her and she seemed more at ease.

“Say,” I conjectured, “I bet you’re not known as Wisdom exclusively on account of your age. In your experience, if I may ask, what sorts of things have you found most rewarding? Adventure? Travel to exotic places? Romance on tropical atolls? The challenge of soaring great distances? Would you have done anything differently?”

Slowly extending her neck to help down the squid, Wisdom looked thoughtful. After a final gulp, she sat motionless for a while, reflecting.

“Perhaps it’s over-simplifying, but there’re two lessons that have stayed with me,” she began. “First, your kids and grandkids are the most important things in your life. I haven’t been able to keep up with all forty of my children, but I see them and their kids off and on. They’re all very dear to me.

Second, you eventually learn who your friends are. A while back, I had a friend – ‘Grandma’ they called her, on account of her age like me. For many years we worked as a team, helping each other raise our chicks. She’s gone now, and I miss her very much. She was a true friend.

Do anything differently? Maybe I should have landed on the port side of this boat if it’s all the same to you.” She grinned the way only an albatross can.

“You’re 68 years old now, Wisdom,” I went on. “How long will you keep circling the globe, flying the southern oceans?”

“Quoth the seabird ‘Evermore,’” laughed Wisdom. “I love evoking Poe even if he was one ‘t’ short of being a poet, or at least an agreeable one. But, no, albatrosses never retire. We just sort of fade away.”

Beyond a line of scurrying clouds the sun had begun to appear over the slate gray sea. Stabilizers still hard at work, the Gamine of the Spume plowed on toward the retreating horizon.

Wisdom had taken up a position on the railing of the veranda, watching the waves intently. As a large one rolled in toward the ship, she plunged into the strong updraft on its windward side, soaring rapidly upward. I watched her go, her elegant cambered wings taking her higher and higher until she was only a speck against the menacing dawn. 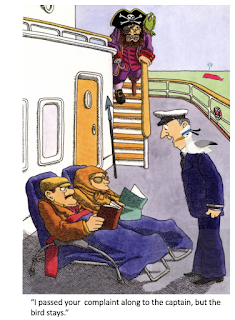 Email ThisBlogThis!Share to TwitterShare to FacebookShare to Pinterest
Labels: Evermore