A Casualty on the James (Or Life in the Colonies) 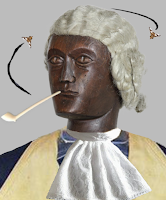 In grade school, Virginia kids of my generation were taught a bronzed and hallowed version of the way Great Britain colonized the New World beginning in 1607 with Jamestown, the first permanent English settlement in North America. In what today would sound rather like Jacobean propaganda warmed over, America, we students learned, was an empty continent with but a few scattered indigenous inhabitants awaiting the advent of civilization (read dominion), commerce, and, of course, Christianity.


Consider in this light the words of Richard Hakluyt, an English writer and ordained priest, published in 1585:

The ends of they voyage [to America] are these: 1. to plant Christian religion, 2. to Trafficke, 3. to conquer.

And so, it began. In 1606, three ships, the Susan Constant, the Godspeed, and the Discovery, were dispatched by the investor-owned London Company bearing mostly noblemen who couldn’t so much as light a campfire, along with a few sailors, to discover gold and found a colony.

And discover they did! Within a few short weeks of landing at Jamestown, Christopher Newport, captain of the Susan Constant, set sail for England laden with a cargo of “fools' gold” and other “precious” minerals. Imagine the investors’ consternation when the good captain fetched up in London with a boatload of worthless rocks!

Gold was never found in Virginia.

For the fledgling colony, the upshot of all this was a debacle. When the winter of 1609 finally came to an end, only 61 of 400 settlers remained alive, and at least some of them had resorted to cannibalism. One worthy killed and salted his pregnant wife for food and was executed for his trouble – the ultimate price for groceries, one supposes. Besides starvation, colonists succumbed to malaria, scurvy, and dysentery. Hardly anyone guessed obesity in the land would one day become such a problem.

Not surprisingly, the settlers were from the get-go sharply at odds with America’s indigenous people, the Indians, who realized in due course that the English had come to seize their lands – and exterminate them in the process as needs be. Adding insult to injury, the settlers also relentlessly sought to “Christianize” the Indians who cottoned to this about as readily as they did the seizure of their lands. Perhaps they simply preferred their own pantheon to the Christian trinity. Or maybe they sensed a subtle disconnect between what was being preached and what done. It wouldn’t have been the first time.

Over a span of thirty-odd years from 1610 through 1646, there ensued a series of three intermittent conflicts, the Anglo-Powhattan Wars (interestingly, during the same time period, 1618 to 1648, the internecine Thirty Years’ War was raging in Europe – for the English, a largely missed opportunity for diversion closer to home). The first of these wars began as a result of settler demands for – indeed, habitual theft of – corn and other foodstuffs from the Indians. The two subsequent major encounters came on the heels of repeated smaller scale attacks and reprisals by both sides, with the colonists systematically destroying Indian villages and crops, and Indians ambushing colonists.

For their part, the Indians did enjoy some military successes – in 1622 and again in 1644 when they managed to kill, respectively, some 300 and 500 of the English. Unfortunately (for the Indians), they failed to consolidate these victories with mopping-up operations to dislodge the invaders once and for all. Instead, they’d fade back into the forest, assuming that the colonists had gotten the message and would pack up and head home to England. But alas, no such luck – the colonists stayed put, re-grouped, and mounted counter-offensives.

Even so, you wonder if in the end, follow-up strikes by the Indians would have made any difference. For it was the colonists’ alien germs, not their primitive, unwieldy firearms, that proved more lethal for the natives. If you nicked yourself scalping an Englishman, who knows what you might have picked up and passed on to your tribe? There were no latex gloves. Or condoms.

Indeed, the losses suffered by the Indians were staggering. When the English first arrived, the region was occupied by about 14,000-21,000 Powhatan inhabiting some 200 villages along the rivers. By 1669, Indian numbers had fallen to around 1,800 and by 1722, many of the tribes that made up the Powhatan Confederacy were reportedly extinct.

As scientist and author Jared Diamond points out in Guns, Germs, and Steel: “For the New World as a whole, the Indian population decline in the century or two following Columbus’s arrival is estimated to have been as large as 95 percent.” And, adds Diamond, “The main killers were Old World germs to which Indians had never been exposed, and against which they therefore had neither immune nor genetic resistance.”

Such were the circumstances during Virginia’s colonial era as, in a sort of plot reversal of H. G. Wells’ War of the Worlds, it was the invaded, not the invaders, who fell victim to alien microbes – in droves. The fact that no one knew about the germ theory at the time seems a poor excuse for genocide.

Ironically, perhaps, the colonists of 1607 had been able to occupy Jamestown island without displacing a single native – this because the Indians knew better than to set up housekeeping there. The place was swampy, brackish, short on game, and ridden with malaria-carrying mosquitoes. Thus, in 1699, Jamestown was finally abandoned in favor of a new capital in Williamsburg about seven miles distant. Whereas big-sized Native Americans had failed to rid Jamestown of settlers, tiny ones – mosquitoes and other flying insects – enjoyed a bit more success.

Amongst these arthropod foes of colonialism – although escaping historical notice – is a particularly vicious and noisome one, the deer fly. These blood-sucking pests are especially prevalent in marshy estuaries and creeks along the James River where they breed, sometimes in numbers large enough to clog a car radiator. Undeterred by insect repellants, they shelter in shady, wooded areas awaiting a blood meal. Swift, strong flyers, they'll orbit your head and shoulders in haphazard circles looking for a place to alight, bite with scissor-like jaw blades, and sop up your blood with a spongey mouthpart. What’s more, they’re extremely persistent, even if occasionally you can wave them off or even nab them in midair. An encounter with one usually ends with the prospective blood meal fleeing, taking shelter indoors (where deer flies won’t follow), or the fly getting squashed. If you’ve ever dealt with the little buggers and felt their painful bite, you know full well how exquisitely satisfying is it to squash one.

Recently one sunny afternoon while plying the James at Tar Bay with my friend Fred in his outboard skiff – about thirty miles upriver from Jamestown – a deer fly suddenly appeared and began circling me. This was surprising because we were quite far from shore. Either the little delta-winged nuisance was out on long range reconnaissance, or she’d (it’s the females that bite) stowed away. She’d circle me for short spells, then alight on the bow deck for a breather.

This foray of hers, you see, would have been quite taxing. The boat was doing ten to twelve miles per hour, so she’d have had to fly something like a trochoid pattern in quick step (the green line represents her flight path; the traveling circle, my head) in order to buzz me while keeping up with the boat.

Time and again I tried to swat her when she landed on deck. But too quick she was, and the dance went on.

At last, she made a strategic blunder. Instead of the deck, she alit on the underside of the bowline which completely shielded her from view. Was she trying to hide? Trying to find shade? Who knows? In any case, I was now as invisible to her as she to me.

WHAM! I swatted the rope. Prizing her off, I flicked her overboard for the channel cats – which is more or less what the Indians might have done with the English if they’d had measles vaccine.

These days, we legacies of the colonists, interlopers from hither and yon, go right on pushing our luck in Indian territory – “rez” casinos where the game is now rigged in favor of the natives. It must be satisfying for native gaming hosts to watch us suckers play the slots to the tune of dice shaken in the cup and the little white ball rattling around the roulette wheel.

“So, you’ve come to shoot craps? Come a cropper as yet? What comes around, goes around – this you’ll learn at roulette. Still trying to get rich off us?  With the croupier, place your bets. You’ll wind up at the cleaners. We’ll have no regrets.”

The moral of the story is merely this: whether for purposes fair or foul, sometimes it’s better to pursue your objectives in plain sight.